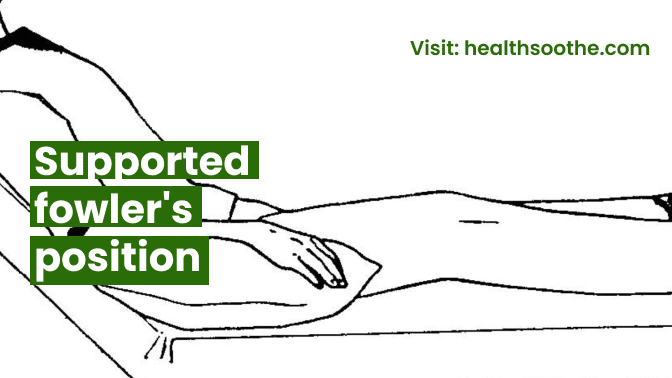 The placement of the patient is essential for a successful surgery. Whether a patient is sleeping peacefully in the emergency room or as an in-patient, the Fowler position is most often used.

Since gravity pushes the diaphragm lower in Fowler's position, it allows for more chest and lung expansion, making it useful for a variety of individuals who have breathing problems.

Learn more about the distinctions between the postures and how Fowler's position is used in typical medical operations.

WHAT IS STANDARD FOWLER’S POSITION

For shoulder surgeries and neurosurgery, the standard Fowler's position, also known as the sitting position, is frequently used. The angle of the bed ranges from 45 to 60 degrees.

The patient's legs could be straight or just slightly bent. Surgery on the head, chest, and shoulders frequently takes place in this position.

WHAT IS LOW FOWLER’S POSITION

Similar to the Supine Position, Low Fowler's is when a patient's head is included at a 15–30° angle. To relieve lower back discomfort after surgery, deliver medication, and avoid aspiration during tube feeding, assume this posture. The ideal resting posture for patients is thought to be the low Fowler's position.

For shoulder operations and neurosurgery, the standard Fowler's position, commonly known as the sitting position, is often employed. The angle of the bed ranges from 45 to 60 degrees.

The patient's legs might be straight or just slightly bowed. Surgery on the head, chest, and shoulders often takes place in this posture.

Standard Fowler's position benefits from improved chest expansion due to the bed's posture, which enhances breathing by aiding oxygenation.

WHAT IS HIGH/FULL FOWLER’S POSITION

The patient often sat straight-backed in the High Fowler posture. Between 60 and 90 degrees are present in the upper body. The patient's legs might be bent or straight.

When the patient is defecating, eating, swallowing, getting an X-ray, or needing assistance breathing, this position is often employed.

Elderly individuals are often placed in the high Fowler's position since it has been scientifically shown to assist with digestion and alleviate respiratory issues.

Long periods of time spent resting in the High Fowler's posture may be uncomfortable and increase the risk of developing pressure sores.

The main goal of patient positioning is to maximise anatomical exposure during surgery.

Adjustments may be made to meet any intolerances of the patient in cases when the patient does not tolerate the sitting posture well.

For instance, patients who have pressure ulcers in their buttocks or lower back may not be able to tolerate sitting.

It may be necessary to take additional steps to lessen pressure and contact between the injured area and hard surfaces. These might include adding more padding, adjusting the angles, or using tilt to relieve pressure on lateral injuries.

Additionally, patients who have had prior spine surgery may have range-of-motion restrictions that rule out this position. Patients should be evaluated to determine whether they can tolerate this position and to identify any inherent patient characteristics that could increase their risk.

A conventional surgical table's built-in sections or the addition of surgical table accessories and positioning aids may be used in a variety of ways to attain Fowler's position.

Beach chairs often include detachable left and right back portions that provide access to the patient's shoulder during surgery.

With more 1sophisticated limb positioners, the surgical team may place the patient's arms in unusual spatial configurations that facilitate shoulder surgical site access for a variety of shoulder joint surgeries.

For positions other than Fowlers, such as lateral patient placement to permit suspended arm positioning for orthopaedic shoulder surgeries, OR personnel may also use advanced limb positioners.

Similar to simple limb positioners, multi-position arm boards allow for neutral placement of the patient's operational arm for access to the surgical site or the non-operative arm(s) to clear the way for the surgeon to reach the target anatomy.

To reach the required Fowler's posture, the general table is often placed using native table parts (no Beach Chair is utilised). To facilitate immobilisation of the head and surgical site access, the native head section of the surgical table is frequently removed and the desired anterior or posterior positioning accessories are attached.

It is always advisable to perform pre-operative patient assessments to evaluate the patient's skin, body morphology, bony prominences, and any unique anatomical areas that call for special consideration during surgery. For more information, read the article on pressure management in the STERIS Healthcare Knowledge Center.

Read Also: What is a Flutter Valve for Breathing?

The Fowler's position, one of the most popular patient positions, offers greater surgical exposure and enhanced ventilation.

The surgical team should think about potential dangers and issues with the Fowler position, including: