Cypri Gold: All You Should Know

Humans suffer from many ailments and some of them, if they involve the secretion of histamine, can be addressed using Cypri Gold. While some people are seeking to reduce their weight to meet up with their goal of a healthy lifestyle, others are seeking to increase theirs, for the same reason. However, a common medication employed to achieve weight gain is Cypri Gold.

Cypri Gold is an antihistamine, that histamine blocker, that belongs to the first generation. It is used to treat many health conditions, such as allergies of different kinds, inflammations, anxiety, colds, and stomach upset. Its effectiveness is not in doubt as it gives the result as soon as possible. However, it can lead to dependency problems for its users, especially if combined with alcohol.

In this article, you will all the information you need to know about Cypri Gold, concerning its safety for use, what it is intended for, and the recommended dosage for each age group. You will also get to know how it works in the body and its suitability for certain people.

What is Cypri Gold?

Cypri Gold is an antihistamine used to treat allergies and their symptoms, such as inflammation of tissues and organs, sneezing, coughing, watery eyes, and so on. It is also used to treat anxiety, stomach upset, and cold. Its many applications make it a common medication. Cypri Gold has the active ingredient, Cyproheptadine hydrochloride, which is usually solid at room temperature.

Its inhibitory influence on the activities of histamine makes it suitable for use in suppressing reactions to allergens, making it easier for the white blood cells to come to the defense of the body against the foreign materials, without a pronounced reaction.

How Does Cypri Gold Work?

Cypri Gold, being a first-generation antihistamine works by blocking the reception of histamine by the target tissues or organs. If an individual inhales dust and the body’s response is to sneeze and make the eyes watery. In the presence of Cypri Gold, such reactions are reduced to the barest minimum or eliminated, while the body gets rid of the dust. 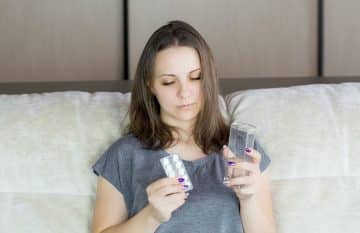 Histamine is a hormone that has a wide reach in the body. It is not secreted from a particular gland but is present in different locations on the neurons where it will be secreted when needed. It influences the response of the white blood cells to attack foreign materials in the body and usually causes inflammation, as a means to isolate the foreign material and prevent it from getting to other parts. Its influence is felt in the central nervous system; therefore, it affects every other aspect of the human body.

Cyproheptadine hydrochloride, the active ingredient in Cypri Gold binds with the neurons of the central nervous system, stopping the passage of histamine – a neurotransmitter – to its target. Normally, the more histamine present in the body, the more alert an individual is. But with the blocking of the neurotransmitter, a user of Cypri Gold may feel drowsy, majorly because it is a first-generation antihistamine. The second generation of antihistamines does not cause drowsiness.

The use of Cypri gold is recommended among individuals that are 2 years old and above and the dosage administration should be according to their body weight. Generally, as a person grows older, they weigh bigger, and they need more medication concentration to take effect.

Adults should use Cypri Gold in a range of 4 to 20 mg per day, depending on the severity of the allergic reaction. In some cases, the dosage may be as high as 32 mg per day, while the average dosage among adults is 12 to 16 mg per day.

Side Effects of Cypri Gold

Cypri Gold exerts its effect by blocking the activities of histamine, meaning an individual that uses Cypri Gold will likely experience what they wouldn’t, were histamine in action. Therefore, the side effects of using Cypri Gold:

On the Central Nervous System include:

On the Gastrointestinal Tract

On the Cardiovascular System

Cypri Gold syrup contains the same active ingredients as the tablets. It is used as a histamine blocker, to relieve allergy symptoms. However, in the course of blocking histamine and managing the body’s reaction to allergens, it influences a lot of bodily activities.

Histamine influences appetite by suppressing it when it is abundant in the body. Therefore, an antihistamine like Cypri Gold will alleviate the effect of histamine, and make you feel hungry because the production of serotonin increases in the absence of histamine.

Is Cypri Gold for Sleeping?

The effect of Cypri Gold on sleep also lies in its action against histamine. Histamine regulates the sleep and wake cycle in humans. It is absent during sleep and increases when you are most alert. Therefore, when you use Cypri Gold because it is a first-generation antihistamine, it suppresses the production of histamine and crosses the blood-brain barrier, causing the brain to relax, and inducing drowsiness and sleep.

Cypri Gold is an antihistamine that is available as tablets and syrup. It is used to treat allergic symptoms and has a secondary use of helping to increase appetite and sleep. It is also used to treat anxiety but interacts with alcohol to cause dependence.

The recommended dosage for different age groups differs and is according to body weight. It is also not known if it is safe for breastfeeding mothers to use Cypri Gold.

What can cause white spots on teeth?

13 Supplements That Will Help You Live a Healthier Life

Applying for Health Insurance in Dubai – Critical Factors to Consider