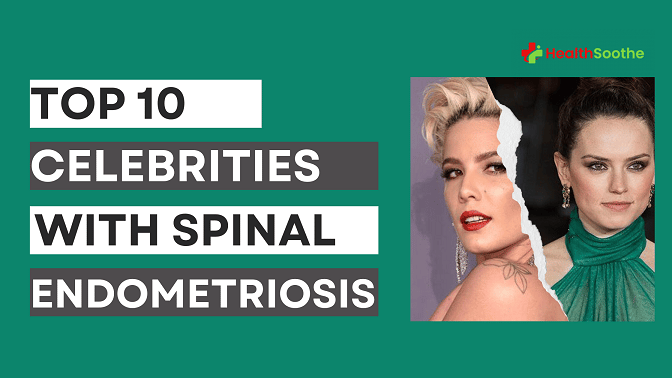 An infection in the uterus is the root cause of endometritis. Chlamydia, gonorrhoea, TB, or a combination of common vaginal bacteria may be to blame. It is more likely to happen following childbirth or miscarriage. It also happens more frequently during protracted labour or C-section.

While some endometriosis sufferers have no symptoms, others struggle with excruciating pelvic discomfort that makes it difficult to urinate, poop, or engage in sexual activity. Often, this ache grows greater when a woman is menstruating.

While there is no known cure for endometriosis, there are treatments that can lessen its pain and other symptoms, including surgery to remove uncomfortable tissue, hormone therapy, such as oral contraceptives, painkillers like NSAIDs, and GnRH medications like Orilissa (elagolix) and Lupron (leuprolide).

In this article, we will give the names of the top celebrities with endometritis

From early youth, Padma Lakshmi, the Emmy-nominated actress, and host of Top Chef had excruciating agony, cramping, nausea, backache, exhaustion, and excessive blood flow that rendered her completely incapacitated for a week every month. Even though she had superb health insurance and access to the best specialists, it took her more than 20 years to receive a diagnosis.

She became the first celebrity to bring attention to this issue in 2009 when she helped cofound the Endometriosis Foundation of America. She collaborated with Tamer Seckin, MD, the physician who gave her the ultimate diagnosis. On the website of the group, she states, "I didn't want the next generation of women to go through what I went through, to feel betrayed by their own bodies or to feel alone."

Chrissy Teigen, the author of the Cravings cookbook, publicly announced on Twitter in February 2021 that she was having surgery for endometriosis four months after losing a pregnancy. She also did what any advocate would do best: she sought advice from other endo warriors on how to rehabilitate.

"I actually feel kicks in my stomach, but they are real. Although my endometriosis surgery is scheduled for tomorrow, this month's period feels just like a baby kick. On Twitter, she remarked, "Sigh.

She uploaded a hospital selfie to Instagram Stories just before having laparoscopic excision surgery and captioned it, "Endometriosis surgery pls endo this pain lol lol lol."

The Lip Sync Battle cohost was open about the challenging healing process, saying, "my belly's become numbed... Each cough and every tiny thing makes it difficult. However, it is still much preferable to endo discomfort and contractions.

She also posted a post-surgery image of her bandaged abdomen and later scars on Twitter. Numerous endometriosis patients shared that they, too, had undergone surgery for the condition in response to Teigen's tweets, and they also provided suggestions for how to cope with the incisions as they heal.

The Girls writer and star wrote an article for Vogue at the beginning of 2018 in which she discussed her choice to get a hysterectomy at age 31 in order to relieve severe symptoms brought on by endometriosis. Dunham had undergone eight surgeries to address the condition, which she had endured for ten years.

"I know that a hysterectomy isn't the right choice for everyone... that it's not a guarantee that this pain will disappear, and that you are performing it due to your deeply held, essential, and — to my mind — feminist belief that women should be able to make a choice about how they want to spend their childbearing years," she writes, explaining her decision to undergo the drastic surgical procedure.

The connective tissue disorder Ehlers-Danlos syndrome, which Dunham disclosed she has in the latter part of the year, has been related to endometriosis and other reproductive conditions.

Amy Schumer, a comedian and the star of the movie Trainwreck, is hilarious, but she is not making light of endometriosis. She opened up about her need for a C-section to birth her son, Gene, in a December 2019 episode of Dr Berlin's podcast Informed Pregnancy.

During the first hour of my C-section, I vomited. Because of my endometriosis, it took me longer than the recommended hour and a half, which was incredibly scary, said Schumer.

While still carrying, Schumer blasted the lack of funding for endometriosis in an Instagram post. Amy is still pregnant and throwing up since funding is rarely allocated to studies on endometriosis or hyperemesis gravidarum for women, but rather to issues like dicks who aren't getting hard enough or old males who want harder dicks.

Actress and YouTube personality Tia Mowry-Hardrict wrote an essay for WomensHealthMag.com to shed light on her experience, specifically what it's like to be a Black woman living with endo after more than a decade of excruciating symptoms and numerous operations.

"Since no one I knew had experienced this personally, I assumed I was alone. I then came to the realization that I had never truly heard an African American in the media discuss endometriosis or their issues with infertility," she stated. "And you feel alone and suffer in silence when you don't know or see anyone else who looks like you talking about what you're going through."

The cookbook author is also active on Instagram, spreading hope and raising awareness of the unfair treatment given to Black women who are diagnosed with this illness. "I was able to make becoming a mother a reality for me after making certain dietary modifications and putting more emphasis on my health and wellness. twice, not just once. In a post highlighting her pregnancy, she wrote, "So here's to all my endo sisters – continue to hope and continue to heal!"

On Instagram, the model and designer Alexa Chung posted a selfie that wasn't quite as gorgeous as some of her other photos: She was walking down a hospital hallway. "I don't want to belong to any club that would accept me as a member, but here I am. #endometriosisclub #lifelongmembership #sorryifyouhaveittooitsucks #endometriosisawareness," she shared while giving a thumbs-up.

More than 65,000 people have liked the post, which triggered an outpouring of support from other ladies who have the same problem.

The Grammy-nominated singer Ashley Nicolette Frangipane, 25, also known by her stage name Halsey, bravely took to Twitter to open up about her battle with the illness. She admitted to having had three miscarriages, four surgeries, and suffering nearly every day of her life in a now-deleted tweet from 2019. "I have contributed/raised over $300,000 in favour of endometriosis research. I'm not attempting to be odd. or an alternative Just trying to normalize a condition that isn't talked about much.

Many medical professionals dismissed Julianne Hough's worries about her painful and frequent periods when she was a teenager. According to Hough, a professional dancer, a former contestant on Dancing With the Stars, and judge on America's Got Talent, "they all agreed what I was experiencing was typical." "I simply reflected, 'This is what being a woman is like.'" Everyone mentioned having painful cramping. At the time, I was unaware of how much worse mine were.

After waiting a year for a diagnosis and undergoing two laparoscopic procedures, Hough keeps things simple when her excruciating abdominal pain comes up. "As easy as it sounds, I soak in an Epsom salt-filled bathtub. I focus my love and energy on the hurting place, so it's also psychological, she claims.

Knowing that endometriosis can make it more difficult to conceive naturally, Hough decided to freeze some of her eggs in 2018.

Whoopi Goldberg, an actress, comedian, and talk show host, had a diagnosis of endometriosis about 40 years ago, and she counts herself extremely fortunate to have found a doctor who could both diagnose and manage her condition. She was so shocked to learn that just a small percentage of women, including her own daughter, was even aware of the illness.

At the 2009 Blossom Ball for the Endometriosis Foundation, Goldberg asserted, "There is nothing nasty about it. You can talk about this without offending any religious organizations. Because if you don't talk about it, a lot more women will find themselves unable to conceive or very near to passing away because [the condition has] caused something else.

The Star Wars actress was diagnosed when she was just 15, and her symptoms flared in 2015 because of the stress of rising to stardom following her performance in the hit movie franchise. "I was in my flat going nuts, and then my skin got really bad with the stress of it all, and I hadn't been well,” she told Elle Australia.

In a since-deleted Instagram post, Ridley had this message for her followers: “Any of you who are suffering with anything, go to a doctor; pay for a specialist; get your hormones tested, get allergy testing; keep on top of how your body is feeling, and don’t worry about sounding like a hypochondriac. From your head to the tips of your toes we only have one body, let us all make sure ours are working in tip-top condition, and take help if it’s needed.”

Antibiotics are used to treat endometritis. If a medical professional discovers that you have an STI, your sexual partner may also require treatment. It's crucial to take all of the medication that your doctor has given. Serious or complicated cases could call for hospital rest and intravenous (IV) fluids.

Endometritis left untreated might result in more severe infections and consequences. On rare occasions, it might be connected to an endometrial cancer diagnosis.