What is Prostate Cancer

What is prostate cancer? 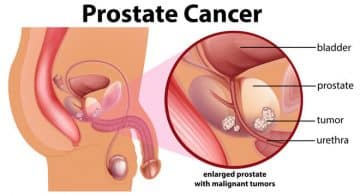 Prostate cancer is characterized by a malignant (uncontrolled) growth of cells around the prostate gland. The prostate is located near the rectum and below the urinary bladder. The prostate has several functions, including producing a liquid that is essential in making semen, secreting prostate specific antigen (PSA), and regulating bladder control.

What are the signs and symptoms?

Detection of prostate cancer through screening is the most common way of getting to treat the disease early. There are often no signs of prostate cancer in the early stages. Screening involves two tests – Digital rectal examination (DRE) and PSA blood test. A DRE test is done by a doctor who physically inserts their finger in the rectum to feel any sign of irregularity. The PSA, blood test, on the other hand, measures levels of PSA in the blood. It is essential for detecting early-stage cancer.

Urinary problems are the most common symptoms of prostate cancer because the prostate surrounds the urethra. When a tumor grows on the prostate, it directly affects urinary functions by pressing on the urethra or bladder. Some of the urinary symptoms include:

Sexual problems (erectile dysfunction) are also a sign of prostate cancer. Also known as impotence, this problem makes you unable to keep an erection. Males with prostate cancer may experience:

Men are more vulnerable to developing prostate cancer as they grow older. It rarely affects young adults below 30. Damage to the DNA of prostate cells is likely to occur among men above the age of 50. Abnormal or damaged prostate cells form tumors and begin to grow out of control.

Lifestyle and diet can contribute to prostate cancer. Obese or overweight people are at risk of getting prostate cancer. The risk is higher if you consume more animal fat, refined sugar, calories and eat fewer vegetables and fruits. Lack of physical exercise is also a risk factor. Ensure that you consume healthy foods and exercise regularly.

Doctors have advised on the need to quit smoking to lower the risk of prostate cancer. Study has shown heavy smokers are more vulnerable to developing the disease. It is also linked to a higher risk of succumbing to the illness.

Genetic history of prostate cancer among males in the family can put you at risk of developing the disease. A son is three times likely to get prostate cancer if his father had it. This risk is even higher among people with many relatives diagnosed with prostate cancer.

Research has shown the geographical area is also a significant risk factor. Prostate cancer numbers reported in North Europe and North America are much higher than those in other parts of the world. Some of the reasons may include lack of exercise habits, poor diets, heredity, environmental exposures, or even more screening procedures.

Isreal Olabanji DST RNhttps://www.healthsoothe.com
Am Isreal olabanji a dental assistant and public health professionals and has years of experience in assisting the dentist with all sorts of dental issues. We regularly post timely and trustworthy medical information and news. My goal is to enlighten everyone in all aspects of health towards participating in fitness, Dental care, healthy recipes, child health, obstetrics, and more.
Previous articleMovies to Watch If You are Feeling Blue
Next articleRP 10 Pill: Everything You Should Know.

How to Cure Sleep Apnea Naturally at Home Without CPAP?

The 8 best essential dental equipment for your dental offices

4 Tips On How To Handle A Dental Emergency

6 Tips to Staying Healthy As You Get Older

GUM MASSAGE: HOW TO MASSAGE THE GUM AND ITS BENEFITS.