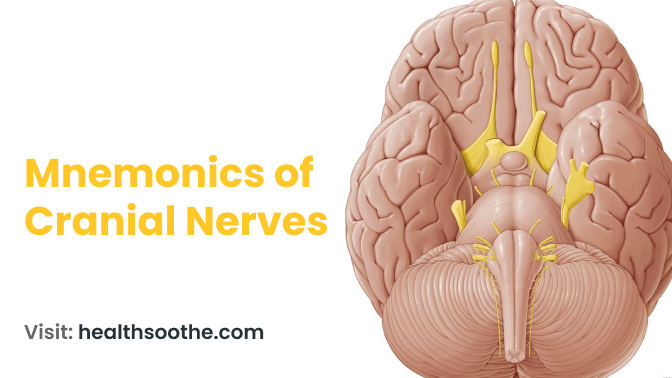 The names of the nerves in the skull may be remembered by using the following mnemonics: A German and a Finn were looking at some hops on the lofty summit of ancient Olympus. Oh, oh, oh, to touch and experience luxurious velvet.

Any pair of nerves in the peripheral nervous system that directly links the muscles and sensory organs of the head and thorax to the brain are referred to as cranial nerves in vertebrates.

Fish and other lower animals have ten pairs, as do amphibians. Although it is unknown if the terminal nerve (CN 0), a 13th pair, is a functional nerve or a vestige of a previous plexus (branching network), it is sometimes detected in humans.

Motor neurons, sensory neurons, or both makeup cranial nerves. The vestibulocochlear nerve assists the balance and hearing organs, whereas the trigeminal nerve has three major branches.

These nerves are given their names based on their anatomy or function. One of the most significant nerves, the vagus, connects to several organs in the chest and upper abdomen.

Read Also: How Doxycycline ruined my Life and what I did about it to be healthy again

Anatomically, a nerve is a sheathed, gleaming white bundle of fibres that links the neurological system to the rest of the body.

Individual nerves are made up of a large number of fibres, and all of them, with the exception of those that originate in sympathetic ganglia, stretch from the brain or spinal cord to the peripheral tissues that they innervate.

In terms of function, nerve fibres may be categorised as either sensory (afferent) or motor (efferent). The functional parts of the nerves are made up of the fibres in these groups and their subcategories.

There are two groups of afferent (sensory) fibres: somatic and visceral. The somatic afferents carry impulses that come from the outside world or that are generated by movements of the muscles and joints; the latter is also referred to as proprioceptive fibres. The organs supporting the body's internal economy send messages via the visceral afferents, and these impulses cause these organs to respond reflexively.

The autonomic system is made up of the general visceral efferent fibres. It is divided into the sympathetic and parasympathetic systems, which differ from one another in terms of anatomical configuration and physiological traits.

Both divisions, along with the ganglia and afferent fibres connected to them, are frequently referred to as sympathetic.

The autonomic pathway consists of a network of two fibres, one of which originates in the brain or spinal cord and ends in a sympathetic ganglion (the preganglionic fibre), and the other of which emerges from the ganglion and travels to the organ being innervated (the postganglionic fibre).

The cranial nerves are given both a name and a number, with Roman numerals typically being used as a standard. They exit the skull through openings called foramina.

The cranial nerves can be classified as sensory-only, motor-only, or mixed. The afferent fibres originate in the cranial sensory ganglia, which are found along the course of sensory nerves close to the brain, with the exception of those of the olfactory and optic nerves.

The brain's sensory nuclei are where central processes, which in this context are defined as "a projecting part, an extension," come to an end. Motor nuclei in the brain give rise to the motor fibres. Some central nuclei, whether sensory or motor, are unique to each nerve, while in other cases, multiple nerves' functional components from the same category may arise from a single nucleus.

A plexus known as the terminal nerve (cranial nerve), in addition to the 12 pairs of cranial nerves typically mentioned, is occasionally noticed in humans, though it is unclear whether it is a functional nerve or a vestige of a former structure.

The names and numbers of the spinal nerves correspond to the area of the spinal cord where each one is attached. There are 8 cervicals, 12 thoracic, 5 lumbar, 5 sacral, and typically 1 coccygeal vertebra.

They are created from the same nerve cells that produce sensory nerve fibres. Cells in the anterior grey column (ventral horn) of the cord are where the fibres of the ventral roots originate.

The dorsal root fibres' central processes either ascend to nuclei in the lower part of the brain or terminate in the cord's posterior grey column (dorsal horn). The two roots join to form a common nerve trunk that contains both sensory and motor fibres, and the branches of this trunk disperse both types of fibres, immediately lateral to the spinal ganglia.

In my anatomy lesson, I recall studying cranial nerves, and I found it difficult to just memorise them. Like you and me, I believe the majority of people need a simple approach to remembering things.

How do you remember cranial nerves dirty Mnemonic? What are some popular mnemonics? What are the 12 cranial nerves and functions in order?
Previous ArticleStucco Keratosis: Features, Treatment, Causes
Next Article Lumbar Puncture Positioning: Everything you need to know