List of Bitters in Nigeria (Alcoholic and Non-Alcoholic Bitters)

Africans, Nigerians especially, are fond of consuming herbal concoctions, and this has led to the popularity of herbal bitters in Nigeria – both alcoholic and non-alcoholic. These bitters are made from herbs that we commonly see. However, some use bark of trees or leaves that are not so common anymore, making them premium. Bitters have been in use in Africa for a long time, especially to cure some health issues, such as pile, locally called jedi jedi.

Bitters are so named because of their taste. They are not the most pleasant thing to consume because of their bitter taste but their effectiveness in managing and treating the infection or disease they are intended for makes them an essential for some people. Many of the herbs for weight gain in Nigeria can be made into bitters but they might receive acceptance by few. However, there are many herbs for erectile issues, fertility issues, blood sugar control, that are available as bitters.

In this article, we will provide you with a list of bitters in Nigeria; the alcoholic and non-alcoholic bitters. We will also help you provide details on what each of these bitters is suitable for and who should use it. This is because many of these bitters have ingredients that should be avoided by certain people, to avoid medical and health issues.

While some people take pride in drinking non-alcoholic bitters, they do so with ignorance. This is because bitters are fundamentally alcoholic. Bitters are drinks made by infusing clear alcohol or liquor with botanicals, which can range from roots to barks, fruits, spices and leaves. The use of alcohol helps to maximize the extraction of the tannins contained in whatever botanical part of a plant is being used.

However, alcoholic bitters are usually drunk as is. They have the same alcohol content as the ones labeled non-alcoholic but they are considered alcoholic because they are meant to be consumed in larger quantities. Hence, they will readily intoxicate their consumers.

Why Do People Take Bitters?

It is tempting to say people take bitters for the medicinal advantages they get from it, but that will be a lie. Most alcohol addicts hide behind bitters to have their share of daily alcohol, this is because bitters ordinarily have as much alcohol, sometimes more, than the regular alcoholic drinks. For instance, a bottle of vodka could have as high as 41% of alcohol, and a drink of bitters have just 1 % lesser than that.

Therefore, people take bitters for medicinal purposes and satisfaction derived from alcohol consumption, as counterproductive that might be. Here are some medicinal advantages attached to consuming bitters.

These bitters usually use roots and herbs that help to maintain erection for infusion.

Diabetic patients can also use herbs that lower blood sugar through herbs. It is best to use the non-alcoholic brands for this purpose as alcohol is not advisable for people suffering from diabetes.

One of the major reasons for making bitters in Nigeria and in the old times is to help make digestion easier by activating digestive enzymes and acids. This helps to address issues such as constipation and indigestion. However, it should be avoided by ulcer patients.

The popular “agbo jedi” is one of the bitters in Nigeria that you can get in a whim at any motor park, especially in the southwestern part of the country. These bitters are believed to help treat pile, a common issue among many Nigerians – believed to be a major cause of sexual dysfunction.

Many take bitters in Nigeria to help them last longer in bed and maintain their erection for a long time. There are specific herbs that acter to this need, and they go by different local names, such as mokole, Bajinotu, dadubule, and many more.

Alomo bitters is one of the most common bitters in Nigeria. It is a commercially produced bitter that is available in the whole of West Africa but originates from Ghana. It is known for its aphrodisiac qualities and have, due to this property, been the most sought-after bitters before the production of others.

Here is another one of the bitters in Nigeria that is specifically known to cure many diseases. It claims to effectively cure about 50 illnesses, including sexual dysfunction. Its advertisement seems to be everywhere and has led to people wondering, “does goko cleanser cure STD?” 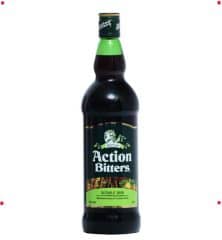 Action bitters is another popular bitter in Nigeria, it has recently been on the increase in popularity and availability. This is majorly due to its aphrodisiac properties and the added digestive secretions stimulation it gives.

It is alcoholic and mostly consumed by the youths.

Ruzu bitters is another one of the common bitters in Nigeria. It is usually used for its weight-control properties, making it suitable for use to treat obesity. Researches such as this have investigated its acclaimed antioxidant effect, and found it to not only help reduce oxidative stress, but also aid in managing diabetes, act as an anti-lipid, and consequently help manage obesity.

A favorite among bitters drinkers, Orijin stands as one of the bitters in Nigeria produced by one of the leading distilleries in the country. It bears similarity to the regular beer but is presented as an herbal bitter that is made from plant extracts such as bitter orange peel, oakwood, kola nut, and many more.

Despite its level of alcohol, some users claim it helps to deal with hangovers, after a night of consuming so much of other alcoholic drinks.

Bajinotu is available in both alcoholic and non-alcoholic variants. It helps to improve gut health and improve fertility. It is contained in 100ml, 200ml, and 375ml bottles.

Other bitters in Nigeria include:

Bitters have been in use for a long time throughout the world. People in ancient Egypt trap herbs in wines for years to infuse the wine with the medicinal values contained in the herbs. Bitters in Nigeria have been produced following the same process, only for shorter time.

Six Easy Steps to do Facial Steaming at Home

4 Tips for Maintaining Your Fitness Goals During the Holidays

Langenbeck Retractor and their uses

10 Ways to get rid of Oral Thrush. Best Home Remedies for Thrush

What You Need To Know About Nasopharyngeal Cancer

Halitosis (Bad breath): Why do Saliva and Tongue Smells Badly?

Why do you Have to Trust Your Child to a Pediatric Dentist?