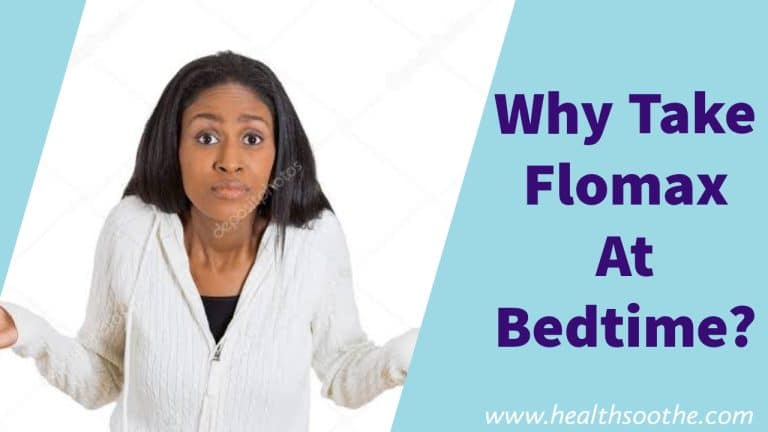 Flomax is a medication used to treat an enlarged prostate. It’s been on the market for over 20 years and is one of the most prescribed drugs in the United States.

The active ingredient in Flomax is tamsulosin, which belongs to a class of drugs called alpha blockers.

There are a few different theories as to why taking Flomax at bedtime may be more effective than taking it during the day.

One theory is that since Flomax relaxes the smooth muscle in the prostate, taking it at night may help reduce urinary symptoms overnight.

Another theory is that since tamsulosin has a half-life of around 9 hours, taking it at night may help maintain its levels in the body throughout the night.

If you’re considering taking Flomax, talk to your doctor about whether taking it at bedtime may be right for you.

Flomax (generic name: tamsulosin) is a medication that is commonly used to treat symptoms of an enlarged prostate, or benign prostatic hyperplasia (BPH).

The prostate is a gland that is located between the bladder and the penis. It produces semen, which is the fluid that carries sperm during ejaculation.

An enlarged prostate due to non-cancerous hypertrophy presses against the neighboring structure, urethra, a nearby structure that serves as the entrance for the excretion of urine from the bladder. Due to the urethra's malfunction, some urine remains in the bladder. An enlarged prostrate can cause urinary problems, such as difficulty urinating, a weak stream of urine, or a feeling that you need to urinate more often.

Flomax works by relaxing the muscles in the prostate and bladder neck, making it easier to urinate. It is important to take Flomax exactly as prescribed by your doctor.

Usually, Flomax is taken once daily, 30 minutes after a meal. However, your doctor may tell you to take it at bedtime if it makes urinating easier.

There are a number of potential side effects associated with taking Flomax and are usually experienced by men. These include:

Mild Side Effects Associated With Flomax;

-Lack of interest in sex

Severe Side Effects Associated With Flomax;

-Priapism – prolonged erection of the penis lasting more than 4 hours

Flomax can only be used by men, according to the FDA, but studies show that women have used it and found it to be just as effective at treating their urinary issues.

While these side effects can be bothersome, they are usually mild and go away after a short time. If you experience any severe or persistent side effects, you should consult with your doctor immediately.

If your doctor has prescribed Flomax for you, it is important to take it exactly as directed. The usual recommended dose is 0.4 mg once daily, taken at about 30 minutes after a meal and the maximum dosage can be 0.8 mg once a day. Your doctor will prescribe whatever’s good for you.

Why Take Flomax At Bedtime?

There are a few reasons why your doctor may recommend taking Flomax at bedtime. For one, it can help reduce the frequency of trips to the bathroom during the night. It can also help reduce morning urinary urgency and improve urination flow.

Another reason to take Flomax at bedtime is that it has been shown to improve kidney function. A study in the Journal of Urology found that patients who took Flomax had better kidney function than those who did not take the medication.

Another reason to take Flomax at bedtime is that it may help you sleep better. One study found that men who took Flomax before bed reported better sleep quality than those who took the medication during the day.

Another study found that Flomax was more effective when taken at bedtime than in the morning. The researchers theorized that this might be because the drug stays in the system longer when taken at night, allowing it to work its magic for a longer period of time.

Lastly, another study looked at how different doses of Flomax affected men with enlarged prostates. The study found that the men who took the higher dose of Flomax (0.8 mg) at bedtime had significantly fewer urinary symptoms and side effects than those who took a lower dose (0.4 mg) in the morning.

So if you're taking Flomax, you may want to talk to your doctor about whether taking it at bedtime might be right for you.

What Is the Best Time To Take Flomax?

There are a few things to consider when trying to determine the best time to take Flomax. The first thing to consider is how the medication works. Flomax works by relaxing the muscles in the prostate and bladder neck, which makes it easier to urinate. It can also help reduce urinary retention and improve urine flow.

Finally, you should also consider your own schedule and lifestyle when determining the best time to take Flomax. If you have a busy morning routine, taking Flomax at bedtime may be more convenient for you. On the other hand, if you are someone who likes to get up and go in the morning, taking Flomax in the morning may be a better option for you.

Is it better to take Flomax at night or in the morning?

There are two schools of thought on when to take Flomax. Some doctors recommend that patients take Flomax at night. The rationale for this recommendation is that Flomax is absorbed better at night, and that taking it before bedtime may reduce the risk of side effects such as dizziness or lightheadedness.

There is no definitive answer to the question of whether it is better to take Flomax at night or in the morning. Some patients may find that they tolerate the medication better when taken at night, while others may prefer to take it in the morning. Ultimately, it is up to the patient to decide what time of day works best for them.

Why Is Flomax Prescribed At Bedtime?

There are a few reasons. First, Flomax can cause dizziness and lightheadedness. Taking it at bedtime reduces the risk of these side effects occurring during the day when you’re active. Second, Flomax is known to affect blood pressure, so taking it at night can help avoid any potential hypotension (low blood pressure) during the day. Finally, Flomax may make you drowsy, so taking it before bed will help ensure a good night’s sleep.

What If I Miss A Dose Of Flomax?

If you forget to take your dose of Flomax, simply take it as soon as you remember. However, if it’s almost time for your next dose, skip the missed dose and continue on your regular schedule. Never take two doses of Flomax at the same time.

If you're taking Flomax for an enlarged prostate, you may have noticed that it makes you have to pee more. This is a common side effect of the medication and is nothing to be concerned about. In fact, it's one of the reasons why Flomax is most effective when taken at bedtime.

When you take Flomax, it relaxes the muscles in your prostate and makes it easier to urinate. This can lead to an increase in how often you need to go to the bathroom. While this can be inconvenient, it's actually a good thing. It means that the medication is working to reduce the size of your prostate and relieve your symptoms.

Overall, there's no need to be concerned about needing to urinate more often when taking Flomax. This side effect is a sign that the medication is working and will eventually help relieve your symptoms.

If you have been prescribed Flomax by your doctor, it is important to take it at bedtime. There are a few reasons for this, the most important being that Flomax can cause dizziness and lightheadedness, which can be dangerous if you are up and about. Taking Flomax at bedtime will help to avoid these side effects and allow you to get a good night's sleep.

Flomax
Previous ArticleHow to make it to the dentist if you suffer from dental anxiety
Next Article Is Unsweet Tea Good For You? Here Are Some Of Its Health Benefits You Probably Didn't Know About