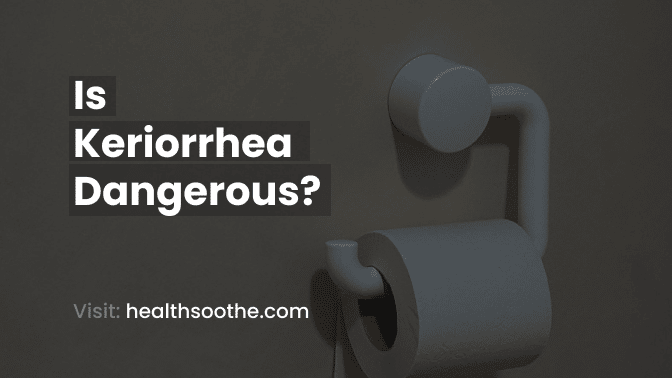 Fish from the Gempylidae family have a lot of wax esters in them. These fish, which are also referred to as snake mackerels, include escolar fish and oilfish. The wax esters from these fish may build up in the rectum after consumption, leading to the leakage of orange, oily stool.

When indigestible wax esters present in oilfish and escolar are consumed, keriorrhea the formation of oily, orange-coloured stools occurs.

Keriorrhea typically develops after consuming wax ester-rich fish from the Gempylidae family, especially in Japanese cuisine (Lepidocybium flavobrunneum, a marine fish of the snake mackerel family, is occasionally sold under the category of "butterfish," and Ruvettus pretiosus).

To ensure proper labelling and the protection of the public before and after any keriorrhea outbreak, quick detection of the two fishes is essential. The sale of the two escolar species is outlawed in Japan by the Ministry of Health.

In Italy, Japan, and South Korea, the import and sale of escolar and oilfish are prohibited. The Federal Drug Administration (FDA) of the United States of America advised against marketing Lepidocybium flavobrunneum (snake mackerel) in interstate commerce in its 1998 hazard guide 6.

For buoyancy control, a lot of deep-sea fishes store a lot of wax esters in their bodies. They are occasionally caught as bycatch alongside tuna and other fish. The most notable ones are oilfish and escolar.

Consuming these fish causes the rectum to accumulate indigestible wax esters, which leads to leaks or discharges of orange or brownish-green oil without any discernible water loss. Keriorrhea is the name for this physiological reaction. Keriorrhea outbreaks have frequently been reported on different continents.

Keriorrhea is a benign, self-limiting condition for which no treatment is necessary.

After consuming oilfish or escolar fish, keriorrhea symptoms typically appear a few hours later and can last up to a few days.

An oily, orange bowel movement is the main sign of keriorrhea. This bowel movement will show up in the toilet as an orange oil that sits above the water because oil is less dense than water.

Keriorrhea has a smell that some people have compared to strong mineral oil.

Along with the oil, a person may occasionally pass faeces. They might only pass the oil at other times.

Other signs and symptoms that could go along with keriorrhea include:

When an individual consumes wax esters from oilfish or escolar fish, keriorrhea develops. Some people may refer to the wax esters as gempylotoxins and the condition as gempylid fish poisoning because both fish are members of the Gempylidae family of fish.

According to a person's sensitivity, the precise amount of gempylotoxins that causes keriorrhea is unknownTrusted Source.

Wax esters are thought to account for nearly 20% of the body weight of Gempylidae fish. This is due to the fish's inability to metabolise the wax esters that are present in their diet naturally. The skin and muscle tissue of the fish also contain an accumulation of wax esters.

A fatty acid and a fatty alcohol make up wax esters. These goods cannot be absorbed and cannot be digested. Therefore, the gempylotoxins have a laxative effect once they reach the colon, causing oily diarrhoea.

Sellers of these fish occasionally mislabel them as being other species of fish. The fish may also go by different names, such as gemfish, butterfish, or rudderfish, in other instances.

Researchers who treated three patients with keriorrhea in 2018 reported that each patient had recently eaten raw fish (sushi) before exhibiting their symptoms.

The sale of escolar fish is prohibited in Japan and Italy. Oilfish and escolar fish imports are discouraged by the Food and Drug Administration (FDA), a reputable source.

The majority of the time, symptoms go away between 24 and 72 hours, but they can occasionally last up to 90 hours. A person with keriorrhea is unlikely to need medical attention or to be admitted to the hospital.

The following actions could be beneficial for someone with keriorrhea in order to aid recovery:

Resting: One should think about skipping work and staying home. They should be aware that bowel movements might happen suddenly and urgently if they need to go outside.

Getting plenty of fluids: People with keriorrhea run the risk of becoming dehydrated. While continuing to drink plenty of fluids, a person should abstain from alcohol and caffeine.

Reintroducing foods gradually: Research on the best foods to eat while dealing with keriorrhea is lacking. However, based on the typical advice for what to eat when dealing with diarrhoea, they might prefer to stay away from large meals and eat bland foods in small amounts.

Other potential causes of oily faeces

Steatorrhea is another illness that may cause oily bowel motions. This phrase refers to faeces that are high in fat. These stools may look oily, pale, and bulky. Trusted Source They might also smell bad.

Steatorrhea may occur as a result of eating meals or foods that are heavy in fat, potassium, or fibre. These may consist of:

Celiac illness: When a person with celiac disease eats gluten, the immune system reacts by attacking the individual's own stomach and digestive tract tissues. This reaction could result in steatorrhea because it can impair how nutrients are absorbed.

The pancreas, an organ that aids in digestion, can develop chronic pancreatitis. It may occasionally swell up and stop functioning properly. This dysfunction may cause steatorrhea by impairing fat absorption and causing poor digestion.

Crohn's disease: The intestines become inflamed as a result of this ongoing condition. Steatorrhea may result from this inflammation's impact on the mechanisms of absorption.

Keriorrhea patients will have oily, orange bowel motions. The disease is generally brought on by eating fish like oilfish and escolar that contain indigestible wax esters.

A person with keriorrhea will most likely heal at home without requiring medical attention, despite the fact that it might be painful and unpleasant.