How to Flush Benadryl out of Your System 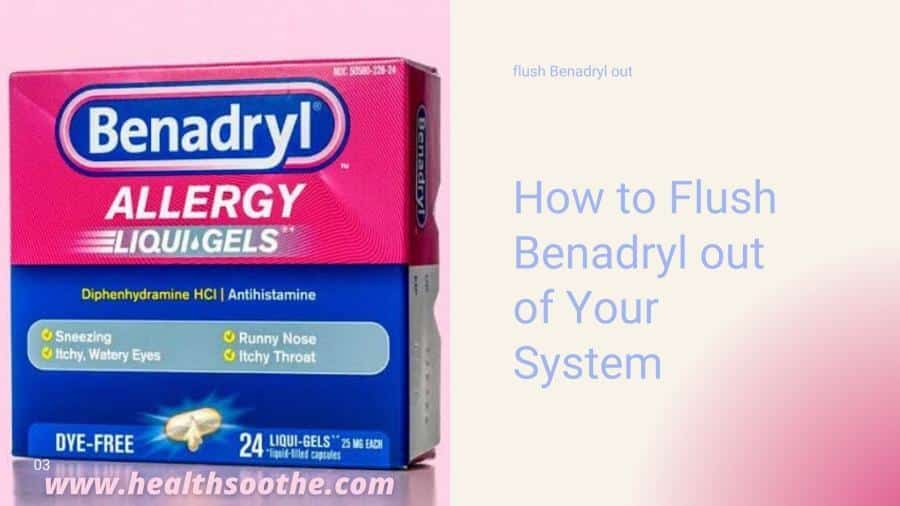 If you know anyone who has accidentally or purposely overdosed on Benadryl, here’s how to flush Benadryl out of your system. Drug abuse is a serious case and many adolescents, young adults, and adults, experiment with different drugs to get high. In many cases, they use drugs that do not give them that euphoric feeling they seek but end up being uncomfortable, or in extreme cases, in the emergency room of hospitals.

Benadryl is an antihistamine. It is used to treat allergy symptoms such as sneezing, watery eyes, itchy eyes, nose, and throat, skin inflammation, running nose, and so on. It functions by inhibiting the body’s response to the presence of allergens – dust, pollen, or any other – by stopping the production of histamine. It is also used to induce sleep as it causes drowsiness.

Benadryl and its Uses

Benadryl is a medication that treats allergy symptoms caused by the secretion of histamine. Histamine is produced by the white blood cells to protect the body against the presence and possible effect of a foreign material – allergens. Histamine causes the body to produce fluid in the eyes and nose, leading to symptoms such as watery eyes, running nose; and other symptoms such as itchy skin, eyes, nose, and throat.

Due to the ability of Benadryl (diphenhydramine) to inhibit the production of histamine, it is called an antihistamine, and at a particular dosage, it helps to address these allergy symptoms. Benadryl is the first antihistamine approved by the Food and Drug Administration, FDA. It is potent and has other uses.

Benadryl is also used to induce sleep because of its Central Nervous System depressive function. It causes drowsiness, making it easier for its users to fall asleep, as is common among many drugs that are first generation antihistamine. The issue of Benadryl overdose majorly arises from its sedative effect and many people erroneously believe it can cause a high.

How to Use Benadryl

Benadryl is available in different forms – tablet, chewables, and liquid gels. The Benadryl brand of diphenhydramine contains only 25 mg of its active ingredient for adults. This can be taken about twice or more, depending on your doctor’s instructions, daily. However, formulations that are specialized for children contain 12.5 mg of diphenhydramine, and it should be taken per doctor or pharmacists’ direction.

Also, be sure to inform your doctor about your current medications to inform a safer prescription. In case you cannot reach your doctor, discuss with the pharmacist on duty as Benadryl can interact with some other drugs.

Side Effects of Benadryl

When an individual uses Benadryl as directed, there is a possibility that they may experience some feelings and physical manifestations that may be unpleasant. Some of them include:

It is advisable that you contact your doctor if you begin to feel any of these side effects.

Benadryl is a drug that causes sedation and many people see it as an avenue to escape the worries of everyday life. They intentionally overdose on Benadryl to help them sleep and have a lesser consciousness of happenings around them. While these set of people do it to escape unpleasantness around them, others do it for the fun of it.

There are also a group of people who overdose on Benadryl because they wrongly think it will give them a high. They mix diphenhydramine with other substances such as benzodiazepines, as in Xanax; and alcohol to increase the sedative effect of Benadryl.

This mostly happens because Benadryl is an antihistamine drug that is available over the counter. Teenagers and individuals with substance abuse issues have easy access to it. With overdosing on Benadryl there are side effects. They include:

Factors that Affect the Benadryl Exit from Your System

Ordinarily, Benadryl should be eliminated from the body naturally. In healthy adults, half of the Benadryl ingested leaves the body after about 12 hours. However, this time increases with certain factor and conditions.

The state of an individual’s liver determines how soon it metabolizes medications and get them out of the body. A healthy liver works faster and more efficiently than one that has some issues. Benadryl puts a considerable amount of work pressure on the liver; therefore, individuals with hepatic issues may have them remaining in their body for longer.

People’s body type and size affects how fast their bodies process and eliminate substances from their body. This holds true for substances other than Benadryl, such as alcohol and other recreational substances. Usually, the higher your metabolism rate, the faster these substances leave your body.

The sedative effect of Benadryl can be compounded by using medications such as Valium and Xanax with it. This makes the half life of this combination medication longer. In a healthy adult, it will take more than 12 hours to remove each of the drugs in the mix to be eliminated from the body.

How to flush Benadryl out of Your System

To speed up the removal of Benadryl from the body, you can employ any of the following ways:

Hydration helps to increase the activity of the kidney and moves substances out of the body quickly. The kidney is an important part of removing toxins from the body. When the pH of urine is high, metabolizing diphenhydramine can be difficult. However, with hydration, your bladder gets full quicker and your pass off urine more frequently. This lowers the pH of your urine and helps to process Benadryl faster.

The lower the dose of diphenhydramine you use, the faster your liver metabolizes it and removes it from your body. If you are on a dosage prescription and you have overdosed, it is better to skip the next dose, as it helps your body to deal with the previous dose better.

Increasing your metabolic rate may be beneficial when you want to flush Benadryl out of your system. Increased metabolism an be achieved by doing some physical activities around the house. While this may seem almost impossible, as you’ll be drowsy, simple chores such as washing or sweeping can kick up your metabolism.

Benadryl is an antihistamine used to treat allergy symptoms. It is also used to treat motion sickness and has sedative effect on its users, even when used according to prescribed dosage. Because it is available over the counter, it is commonly abused and combined with other medications to increase its sedative effect.

To flush Benadryl out of your system, increase your metabolism, hydrate, and use lower doses.

Previous ArticleHow to Flush Benadryl out of Your System
Next Article How to Identify Mouse Droppings and the Diseases they Spread.