Hair Casts: Causes, and Everything you should know 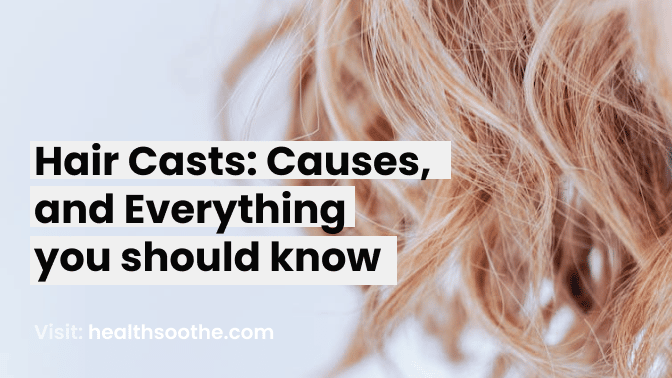 Hair shafts are encircled by hair casts, which are tiny, elongated, cylindrical concretions. Hair casts may be moved and removed with ease and vary in size from 2 to 7 mm. It was first used in 1957 by Kligman.

Hair casts, also known as "pseudonits," can easily be distinguished from genuine "knits" because they slide along hairs when being grasped by the fingers.

True nits are immobile and attached to the hairs. Casts in the hair are often asymptomatic and more prevalent in young women.

In girls who tightly plate their hair for extended periods, hair casts are often seen. As a result, they are visible in females who use overnight rollers as well as those who style their hair in braids, twists, dreadlocks, braids, and weaves with extensions.

When a scalp disorder is not present, hair casts are described as "primary," whereas they are "secondary" when a disorder is present. Psoriasis, seborrheic dermatitis, pemphigus, traction alopecia, and scarring alopecia are examples of common secondary causes. Deodorants and hair sprays are just a couple of the many additional potential causes.

The hair on that hat is simple to remove. Peripilar and parakeratotic keratin casts are the two varieties.

The condition is sometimes referred to as pseudo units because of how much it resembles pediculosis capitis clinically.

Although mistaken diagnoses are not uncommon, it is crucial to accurately distinguish this disorder from others with a similar presentation.

We present here a case of HC in a 22-year-old male patient with androgenetic alopecia that included both body and scalp hair. Pseudonits also impacted the patient's sister.

Some Introduction About hair casts

Parakeratotic ("secondary") or nonparakeratotic peripillar1https://pubmed.ncbi.nlm.nih.gov/28839391/ ("idiopathic") casts are the two forms of HCs. The secondary form is more prevalent and often occurs in conjunction with clinical disorders that cause scaling of the scalp, such as psoriasis, pityriasis amiantacea, seborrheic dermatitis, or infections of the scalp or abnormalities of the hair shaft.

It's rare to have an idiopathic peripillar keratin cast. It affects young children and women, and it is not linked to any illness or condition of the scalp.

There is a dearth of literature about the illness despite the fact that it is not uncommon.They are often misdiagnosed. The illness is sometimes mistaken for the more prevalent scalp infection known as pediculosis capitis.

When examined closely, hair shafts revealed whitish, shiny, firm cylindrical concretions that were 2 to 7 mm long and could be easily moved along the shaft.

They were widespread on the scalp, sparing the area around the 1-2 cm proximal hair roots on the occipital and parietal regions. His pubic, axillary, chest and beard hair were also impacted.

The hair root sheaths are transported by the hair during its usual outward development. Some root sheaths fail to desquamate properly for unknown reasons; as a result, they remain encircled by the hair shaft after leaving the hair follicle and eventually break off to form hair casts.

Hair cast pseudonits may sometimes also be brought on by structural anomalies of the hair shaft, such as trichorrhexis nodosa and monilethrix.

Dry shampoo, deodorant, and cosmetic hair spray residues may all result in pseudocasts, which resemble nits extremely closely. Additionally, traction alopecia exhibits pseudonits hair casts as a consequence of the root sheaths being pulled out by too much strain.

It seems that ladies who tightly plate their hair for an extended length of time are more likely to develop hair cast pseudonits. By generating localised scalp ischemia and inflammation, this high traction encourages the growth of pseudonits.

Acantholysis in the outer root sheath epithelium during pemphigus vulgaris of the scalp might result in the development of hair cast.

The way that hair casts look might change depending on the aetiology. Hair casts can appear as white scales, frequently seen in seborrheic dermatitis or psoriasis of the scalp, and appear on the hair shaft during trichoscopy as easily detachable white, oddly shaped, amorphous structures. Although typically easy to identify during a clinical examination, they can be mistaken for nits in children.

The easiest way to distinguish hair cast from other conditions that are similar is by their propensity to slide easily down the hair shaft.

Pseudonits are often diagnosed clinically, although sometimes both patients and doctors may get concerned when they are present.

In a variety of paediatric and adult hair and scalp disorders, trichoscopy is a rapid and painless procedure that offers useful information.

It has reportedly proven helpful for diagnosing head and pubic lice since it can clearly show the presence of parasites and nits and tell full nits from empty nits.

The issue may return after quitting treatment, however, the greatest results are achieved with a 0.025% retinoic acid lotion solution accompanied by the physical removal of the cylinders using a comb.

Although HCs are harmless and not connected with any illness, the lack of knowledge about them often results in diagnostic uncertainty, which may result in inflated expenses and concern for both patients and doctors.

In this example, a 22-year-old male patient had HC affecting both scalp and body hair in conjunction with androgenetic alopecia. The Sister of the patient also had a similar hair cast.

Are hair casts contagious? How do I get rid of hair casts? What causes hair casts? What do hair casts look like?
Previous ArticleBlack Ginger: What does black ginger do for the body?
Next Article The Right Thoracentesis Position: Everything else you should know