Sometimes, your gum gets swollen and bleed. Most people have no idea why this happens, but it could be a result of physical injury to the gum or periodontal disease. On occasions when your gum is inflamed, the periodontal disease is in its early stages and can be easily dealt with. However, when the gum begins to pull away from a tooth, it might lead to bad breath or loss of a tooth.

In this article, we will explain what periodontal disease is, its cause, the symptoms to look out for and how you can take care of it at home.

What is Periodontal Disease?

Periodontal disease, also called gum disease, is a condition that affects the brownish-red tissue that holds the teeth in place. It involves the inflammation of these tissues (the gum), bleeding, and in the advanced stages, the retraction or separation of the gum from the tooth.

The periodontal disease presents itself in two ways. The first way, Gingivitis, is experienced at the early stages of periodontal disease while Periodontitis, the second stage, occurs when it is advanced. Each of these diseases is caused by a common agent and they can both be treated. Although periodontal disease generally becomes troublesome in middle age, there is some evidence that early symptoms of gingival disorders occur during childhood or adolescence 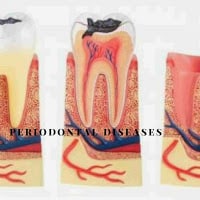 Gingivitis is a dental condition that affects the gingiva. It arises, usually, as a result of poor oral hygiene. It is characterized by the swelling of the gum. The inflammation of the gum is sometimes painful to touch and may bleed.

Gingivitis is caused by the presence of bacteria in the mouth. However, it mostly occurs when there is a plaque on the tooth. A severe case of gingivitis that is left untreated may lead to periodontitis although it doesn’t happen every time. On the other hand, periodontitis does not occur without gingivitis.

It can present symptoms such as halitosis, swollen and painful gum, bleeding gum, and red or purple gums.

Periodontitis is a periodontal condition that has progressed from gingivitis. It usually has the same symptoms as gingivitis but the appearance of the gum is usually different.

In periodontitis, the gum will begin to separate from the tooth which may lead to tooth loss and may spread to the jawbones, causing pain.

Pregnant women seem particularly vulnerable to periodontitis and gingivitis if they have been experiencing periodontal disorders because the temporary hormonal imbalance of the pregnancy tends to exaggerate the effects of this condition.

One kind of gingivitis that involves projections of gum tissue between the teeth is sometimes referred to as trench mouth because it was not an uncommon form of periodontal disease affecting soldiers during World War I. The infection is associated with poor oral hygiene along with nutritional deficiencies and generally depressed condition of health.

Since Periodontitis – the advanced stage of Periodontal disease – is usually preceded by gingivitis, they share the same cause. However, there are factors that greatly contribute to the occurrence of periodontal disease and they are:

The signs that show a person has the periodontal disease is derived from the symptoms of both gingivitis and periodontitis.

In some individuals, signs may not be apparent in the early stages of periodontitis, that is gingivitis. However, when there are signs and symptoms, they usually include:

It has been realized that most patients that receive the standard periodontal disease treatment usually have a re-occurrence after three to four months. Therefore, it comes down to day to day oral hygiene to keep the disease at bay.

Here are some ways to achieve the prevention of periodontal disease through oral hygiene.

This has been preached since childhood but even then, it has been a chore. It is essential that you brush your teeth at least twice daily to discourage the formation of plaque as a result of food materials accumulation.

You can even go as far as cleaning your mouth with water after every meal to remove food particles since gingivitis can be caused by aggression to the gum which may occur if due to consistent brush bristle contact with your gum. Here are the correct brushing techniques: How to clean your teeth: Step-by-Step Guide

Reach the spaces between and behind your teeth with floss. These crevices may not be adequately reached by your toothbrush, but floss will help clean them out. Refer to this guide for proper flossing: https://www.healthsoothe.com/step-by-step-guide-to-teeth-flossing/

To remove the bacteria that is responsible for producing acid that leads to the gradual separation of the gum from the teeth. Swirl the mouthwash around in your mouth for about 10 minutes and spit it out. When to use Mouthwashes: Before or after brushing?

This is the initial treatment process for addressing periodontitis. It involves the removal of plaque and calculus that has grown beyond the gumline to re-establish gum health.  It is non-surgical and uses Root Surface Instrumentation (RSI) to disturb the biofilm of the bacteria, and consequently its growth. This treatment process may take up to three visits to the dentist.

During this procedure, other dental issues may have arisen such as occlusion adjustment and open gum-teeth contact closure. Also, affected dentin may be removed through a process called scaling and root planing.

In this stage, your dentist will check if there is an improvement in dental health and if there is a retrogress in the inflammation of your gum. It is usually done about a month after the initial therapy and it evaluates the success of the scaling and root planning process as well.

This process of treatment becomes essential if the non-surgical procedures have failed to stop the further development and spread of the bacteria. It is usually done when the bone is affected and it also helps to regenerate lost bone.

Upon successful completion of the dental treatment procedures, the restored dental health has to be maintained to prevent the gum and teeth from going through the experience again. This is achieved by following all the preventive guidelines as given in this publication.

Also, you can employ some home treatment alternatives for gum disease as maintenance routines.

It is possible to care for yourself when your teeth and gum has not been taken over by the bacteria. There are materials that can disrupt the growth and spread of the bacteria and when combined with good oral hygiene, they may prove effective in treating gingivitis before it progresses and become more serious.

Hydrogen peroxide is a common item in the first aid box. It is commonly used to treat wounds to prevent or kill bacterial infection. Due to its antibacterial nature, it is effective in bringing the bacterial that causes periodontal disease under control.

Pour a little amount in your mouth, be careful not to swallow it, and let it sit there for about 10 minutes before you spit it out. It will enter into the periodontal pockets and disrupt the microbial colonies, thereby stopping their growth.

It is effective as a preventive measure but less effective when the disease has progressed from gingivitis to periodontitis.

This medication is usually used during the treatment of periodontitis. It is effective and should be used only in small quantities. It stops the growth of bacteria and helps to restore normalcy in the gum.

Periodontal disease is a disease of the gum that could be in its initial stage as gingivitis or its advanced stage as periodontitis. It is caused by the growth and spread of bacteria beyond the gum line as a result of poor oral hygiene.

Studies have found that after the age of 50 more than half the people in America have periodontal disease. At the age of 65, nearly everybody has this disease. It can be treated through medication and other non-surgical procedures but its long-term success depends on the state of the patient’s oral hygiene. Therefore, the best management practice for periodontal disease regardless of treatment procedure is good oral hygiene.

Isreal Olabanji DST RNhttps://www.healthsoothe.com
Am Isreal olabanji a dental assistant and public health professionals and has years of experience in assisting the dentist with all sorts of dental issues. We regularly post timely and trustworthy medical information and news. My goal is to enlighten everyone in all aspects of health towards participating in fitness, Dental care, healthy recipes, child health, obstetrics, and more.
Previous articleTooth Decay: Causes, Symptoms, Prevention, Treatment, and Self Care
Next article13 Signs Of Depression And When To Seek Help

10 Effective Ways to Improve Testosterone Levels in Your Body

Dental Terminology And Their Uses

5 Common Dog Dental Problems And When to Seek Help