The name, Tribulus terrestris in Yoruba is not one you will easily come across as it goes by a different name. However, its effectiveness and use among the Yoruba people of Nigeria is well known and has been passed from generation to generation. Unless it is really needed, you will hardly find anyone in search for it, mainly due to its nature.

Tribulus terrestris is spiny – hence its alternative name, Puncture Vine – and can injure anyone who harvests it, if care is not taken. It grows well in the tropics and warm temperate and is abundant as weeds since there is hardly any known commercial production of the plant in Nigeria and Africa as a whole. it is believed that Tribulus terestris, also called goat head, helps to increase testosterone production, hence its suitability to treat men’s infertility issue and sexual dysfunction. It also has the potential of addressing sexual hormonal imbalance in both men and women.

In this article, we will talk about the noxious but medically beneficial weed, Tribulus terrestris. We will consider its uses and how it imparts those uses. You will also get to know some of the common name this plant goes by, including what Tribulus terrestris is called in Yoruba. However, can taking too much of it be detrimental to your health?

What is Tribulus terrestris?

Tribulus terrestris is a flowering plant that is mostly considered weed in many parts of the world. It makes movement tricky due to its prickly and spiny fruits that punctures tires and pricks the feet through the soles of shoes when stepped on in the bush.

It is an herb that has been used in proffering solution to sexual dysfunctions in both men and women since the ancient times. It has also been used by bodybuilders with the believe that it increases the testosterone levels of the body, making muscle gain easier and recovery from muscle tear faster. However, this believe has been debunked as its ability to increase testosterone does not apply to humans. 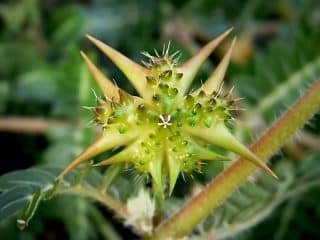 Tribulus goes by many names, depending on the region it is found. In the western part of the world, it goes by names such as caltrop, goat head, devil’s thorn, tackweed, puncture vine, among others. In the Mediterranean, it goes by bindii, burra gokharu, and bakhadi. In Nigeria, it is called the common names given by the west. However, Tribulus terrestris in Yoruba is errorneously called Dagunro – a name attributed to spiny amaranth (Amaranthus spinosus).

Tribulus has an history of being an herbal plant, used to treat many ailments and serves as a thickener. However, its use a traditional medicine in India and China far outweighs its popularity as a thickener. Here are some of the ways Tribulus have been used.

High blood sugar is a common problem today and Tribulus terrestris have been tested to effectively lower the blood sugar in 98 women that have type 2 diabetes. The women took 1000 mg of the herb for three months and had lower blood sugar.

One of the common misconceptions about what Tribulus works for is to enhance athletic performance. Although it may affect some increase in sexual functions, it does not make an athlete perform better by increasing any of its hormones. This use has been debunked and athletes are advised to stay away from it, if their aim of using it is for a better performance.

In the same test that proves the efficacy of Tribulus in reducing blood sugar, it was also noted that the participants, when given 1000 mg of the herb experienced a lower cholesterol level after three months.

A lower cholesterol level points to a better heart health and function. It also improves the general health of the various organs of the body as hormones are effectively produced and used. Weight management also becomes easier.

Although Tribulus does not have any effect on the testosterone level in humans, it helps to improve some sexual dysfunctions, making sex more enjoyable and worthwhile. In men, it was found that the men involved in the test had their desire for sex increase by 79% and the women, by 67%.

It effectively increases arousal in both sexes.

While some people may have their desire for sex intact, they may be unable to perform the act due to the failure of their sexual organs to partake in the excitement. In men, this condition may be expressed in erectile dysfunction – a condition where the penis fails to remain erect for sexual intercourse. In women, it may be insufficient or lack of vaginal lubrication.

Tribulus terrestris helps to improve erections in men and helps women lubricate better. According to the research, a daily dose of 1500 mg will help to achieve this improved sexuality in men and a lower dosage of about 500 mg will help in women.

Apart from the confirmed efficacy of Tribulus, there are other uses, to which this plant is applied. These applications are not proven to be effective but people have used Tribulus to address other conditions apart from the ones listed above. Some of them include Chest pain, Enlarged Prostate, Menopause, Coughs. Cancer, Eczema.

There is insufficient data to reach a conclusion on the appropriateness of using Tribulus for more than a 90 days period. However, there is a likelihood that it is unsafe to consume the Tribulus fruit as it injures the lungs.

Also, consult your doctor before you use Tribulus as it may interact with your drugs, causing debilitating side effects.

There is no evidence that answers in the affirmative if Tribulus terrestris increases sperm count. It is known to be effective in improving erection, thereby treating erectile dysfunction in men. However, its efficacy in increasing sperm count is unknown.

Does Tribulus Terrestris Cause Weight Gain?

Tribulus is used as a thickener in making buttercream. Its use as a dietary supplement does not include to help its users gain weight. Tribulus terrestris helps to reduce blood sugar and cholesterol but has no direct effect on weight gain. If anything, it helps to reduce weight effectively and safely.

Tribulus terrestris is an herb that has been used for a long time. Its safety and authenticity concerning the medical conditions it address has recently been subjected to scientific tests; however, more tests need to be carried out.

It is effectively used to treat erectile dysfunction in men and vaginal dryness in women. It also helps to lower blood sugar and cholesterol, making weight management easier. However, other uses such as the treatment of angina, eczema, and symptoms of menopause, are yet to be determined by scientific research.

Why is My Skin Constantly Breaking Out?

Health Benefits of TomTom Sweet and Things You Should Know About It.

Prepare for Your Counseling Session

Farmapram – What You Ned to Know About the Mexican Alprazolam

Teeth Whitening Pen : Usage, Benefits, Ingredients and How to Use.