Ovurol: Vagina Ovule - Everything you should know 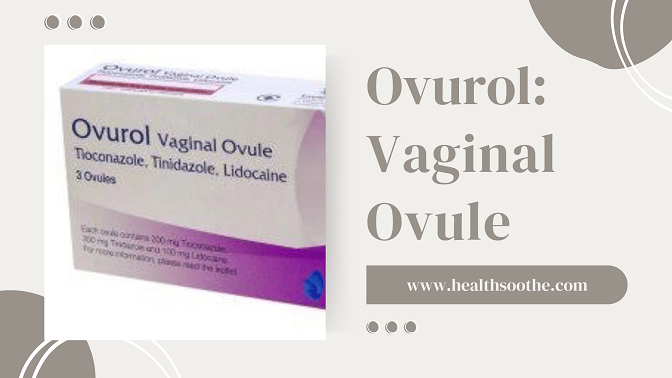 Most people are disturbed about what ovurol is and what it is used for. Vaginal infections are not a cause for alarm as times have changed and there are cures to certain things.

In this article show
What Is Ovurol?
1. Tioconazole
2. Tinidazole
3. Lidocaine
Frequently Asked Questions About OVurol
How is an Ovurol Vaginal ovule inserted?
How long does it take an ovule to dissolve?
Can Ovurol Cause Bleeding?
Side Effects Of Ovurol Vaginal Ovule
Conclusion:
Additional resources and citations

In this article, I’ll be writing about ovurol and what it is used to treat.

Read Also: Klovinal Vaginal Pessary | How to use it effectively, Side effects and more

Ovurol is a vaginal ovule used to treat a fungal infection that has outgrown control and the pain it causes in and around the vagina.

The components of  Ovurol vaginal ovule are:

Tioconazole is an antifungal drug used to treat fungal infections.

Candida (yeast) infections of the vagina are treated with tioconazole vaginal, which is administered intravaginally.

Other uses of tioconazole vaginal not covered by this pharmaceutical guide may also be made.

An antibiotic called tinidazole is used to treat specific types of vaginal infections (bacterial vaginosis, trichomoniasis). Additionally, several types of parasite infections are treated with it (giardiasis, amebiasis). It functions by preventing the development of specific bacteria and parasites. Only specific bacterial and parasite illnesses are treated by this antibiotic. For viral infections, it is ineffective (such as the common cold, and flu). Any antibiotic that is overused may stop working to treat subsequent illnesses.

The topical 1anaesthetic lidocaine is used for the following things:

Some of the recurring questions asked about Ovurol vaginal ovule are:

How is an Ovurol Vaginal ovule inserted?

Once the ovule is safely contained within the applicator, put the top end of the device as far into your vagina as it is comfortable to do so, much like you would a tampon. Your finger should be used to push the movable plunger in so the Ovule can be put into your vagina.

How long does it take an ovule to dissolve?

The ovule dissolves inside the vagina in about 40 minutes, during which time it develops a coating on the vaginal wall. Any leaking should be prevented by the product's ability to maintain consistency following implantation.

There are many symptoms associated with yeast infections, including bleeding. Normal light bleeding or spotting causes no concern.

However, if your bleeding is substantial or if it persists after the infection has subsided, it could be an indication of another underlying problem. It could be important to receive additional care to reduce your symptoms and stop further problems.

Side Effects Of Ovurol Vaginal Ovule

The side effect include;

The majority of reported side effects are rare, minor, and self-limiting. Neezing, vomiting, anorexia, diarrhoea, and a metallic taste are gastrointestinal side effects. Rarely, severe hypersensitivity reactions might manifest as urticaria, pruritis, skin rashes, and 2angioneurotic oedema. Tinidazole, like related substances, has the potential to cause momentary leukopenia. Headache, exhaustion, a hairy tongue, and black urine are other infrequently reported side effects.

Occasional minor irritation that is localized and transitory; if a hypersensitive reaction develops, medication should be stopped and the proper therapy should be started.

It is not advisable to use the medication if you smoke cigarettes and tobacco. If the symptoms of infection still remain, you need to see a doctor.