Normal PIP Range on a Ventilator 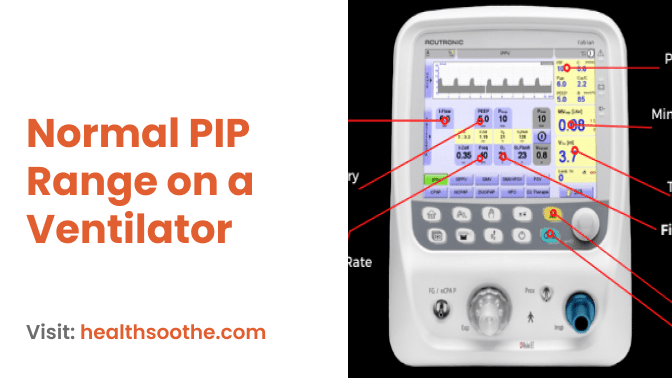 The highest pressure recorded during a respiratory cycle is called peak inspiratory pressure (PIP), and it depends on both the respiratory system's compliance and the resistance of the airways.

The most intense amount of pressure placed on the lungs during inhalation is known as peak inspiratory pressure (PIP).

The number in mechanical ventilation represents a positive water pressure in centimetres. It is sometimes referred to as the maximal inspiratory pressure (MIPO), which is a negative value, in normal breathing.

With any airway resistance, peak inspiratory pressure rises. Increased secretions, bronchospasm, biting down on ventilation tubing, and decreased lung compliance are all potential factors that could raise PIP.

Unless the patient has acute respiratory distress syndrome, PIP should never be chronically higher than 40(cmH2O).

The breathing process is supported or taken over by a ventilator, which pumps air into the lungs.

In intensive care units (ICU), patients may require the assistance of a ventilator. This also applies to those who have severe COVID-19 symptoms.

A ventilator is a machine that pumps air into the lungs to support or simulate breathing. It's sometimes referred to as a breathing machine or vent.

In cases where a patient is unable to breathe properly on their own, doctors use ventilators. They might be under general anaesthesia, have a breathing disorder, or both to explain this.

There are various types of ventilators, and each one offers various degrees of assistance. The kind a doctor chooses will depend on the patient's health.

In both hospitals and ambulances, ventilators are crucial in saving lives. They can also be used at home by those who need ongoing ventilation.

What is the Normal pip range on ventilator?

The most intense amount of pressure placed on the lungs during inhalation is known as peak inspiratory pressure (PIP).

Due to the constant intrinsic resistance that must be overcome by P resistance, Pplat can never be greater than peak inspiratory pressure (PIP). The number in mechanical ventilation represents a positive water pressure in centimetres. PIP typically ranges between 25 and 30 cm H2O.

When positive-pressure ventilation is necessary, the peak inspiratory pressure (PIP) should be kept below 20 to 25 cm H2O, especially if pneumothoraces or new bronchial or pulmonary suture lines are present.

Every time the peak pressures and plateau pressures rise to the same level, the risk of barotrauma increases 2. Any airway resistance results in an increase in peak inspiratory pressure (PIP).

Peak inspiratory pressure (PIP) can be raised by things like bronchospasm, increased secretions, biting down on ventilation tubing, and decreased lung compliance.

In an inspiratory hold maneuver, the patient is given a fixed volume of air to determine the plateau pressure (Pplat), which is the pressure used to maintain the air in the lungs.

The plateau pressure (Pplat), which is produced by the lung tissue itself, is the pressure that persists after the hold maneuver. Interstitial lung disease, pulmonary edema, and decreased pulmonary compliance can all have an impact on this.

How does this relate to a situation in the real world, then? Imagine you enter the space to find the peak inspiratory pressure (PIP) at 60 cm H2O. Let's say your plateau pressure (Pplat) is only 20 cm H2O when you perform an inspiratory hold maneuver.

This indicates that great pressure is overcoming airway resistance. You will now focus more on factors that reduce the radius of the airway pipe. For instance, the tubing coming off the ventilator has a significant kink because the patient was biting his endotracheal tube.

It's important to keep in mind that pressures will change as the underlying pulmonary problem starts to get better. Conformity will alter. Curves of pressure and volume will alter. Peak and plateau pressures are unreliable indicators of clinical progress.

Increased mean airway pressures and peak inspiratory pressures have both been linked to lung parenchyma trauma.

What is the maximum level of a ventilator?

The range of the pressure support delivered, expressed in cmH20, is 5 (minimal support) to 30. Patients who only require 5 to 10 pressure support might be able to breathe on their own after that.

Who needs a ventilator?

If someone has respiratory failure, they need ventilation. When this happens, a person may not be able to breathe in enough oxygen or expel carbon dioxide very effectively. It may pose a threat to one's life.

Respiratory failure can result from a variety of wounds and illnesses, including (Reliable Source:

Some COVID-19 patients experience excruciating breathing problems or ARDS. However, this only happens in people who develop a critical illness, which makes up about 5% of all confirmed COVID-19 cases.

Additionally, doctors use ventilators for surgery patients who won't be able to breathe on their own because of anaesthesia.

With any airway restriction, peak inspiratory pressure rises. Additionally, it happens when PIP secretions increase, bronchospasm occurs, a person bites down on a ventilation tube, and their lung compliance decreases.

I sincerely hope that this content will be tested.