Meningitis is an inflammation of the membranes (meninges) surrounding your brain and spinal cord.

The swelling from meningitis typically triggers symptoms such as headache, fever and a stiff neck.

Most cases of meningitis in the U.S. are caused by a viral infection, but bacterial and fungal infections are other causes. Some cases of this disease improve without treatment in a few weeks. Others can be life-threatening and require emergent antibiotic treatment.

Seek immediate medical care if you suspect that someone has this disease. Early treatment of bacterial meningitis can prevent serious complications.

This is another one of the communicable diseases. It can be caused either by bacteria or by a virus. This infection afflicts the spinal cord and brain. The name derives from “meninges” or the soft tissues of the brain that get damaged by the disease. 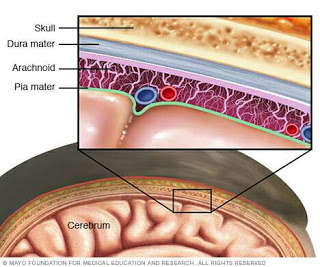 It’s one of the sicknesses in Nigeria that has caused a recent minor outbreak, especially its Zamfara province. Almost 700 cases were diagnosed and 50 people died during this 2015 outbreak. Since the end of 80ss, there have been almost a million cases of this disease in Africa. The death rate is comparably small (just 1 percent). However, many survivors remain deaf, blind or demented for the rest of their lives.

Bacteria that enter the bloodstream and travel to the brain and spinal cord cause acute bacterial meningitis. But it can also occur when bacteria directly invade the meninges. This may be caused by an ear or sinus infection, a skull fracture, or, rarely, after some surgeries.

Several strains of bacteria can cause acute bacterial meningitis, most commonly:

This bacterium is the most common cause of bacterial meningitis in infants, young children, and adults in the United States. It more commonly causes pneumonia or ear or sinus infections. A vaccine can help prevent this infection.

This bacterium is another leading cause of bacterial meningitis. These bacteria commonly cause an upper respiratory infection but can cause meningococcal meningitis when they enter the bloodstream. This is a highly contagious infection that affects mainly teenagers and young adults. It may cause local epidemics in college dormitories, boarding schools, and military bases. A vaccine can help prevent infection.

Haemophilus influenzae type b (Hib) bacterium was once the leading cause of the disease in children. But new Hib vaccines have greatly reduced the number of cases of this type of meningitis.

These bacteria can be found in unpasteurized cheeses, hot dogs and luncheon meats. Pregnant women, newborns, older adults and people with weakened immune systems are most susceptible. Listeria can cross the placental barrier, and infections in late pregnancy may be fatal to the baby.

The disease usually mild and often clears on its own. Most cases in the United States are caused by a group of viruses known as enteroviruses, which are most common in late summer and early fall. Viruses such as herpes simplex virus, HIV, mumps, West Nile virus and others also can cause viral disease.

Slow-growing organisms (such as fungi and Mycobacterium tuberculosis) that invade the membranes and fluid surrounding your brain cause chronic meningitis. It later develops over two weeks or more. The symptoms of this type of disease — headaches, fever, vomiting, and mental cloudiness — are similar to those of acute meningitis.

It is relatively uncommon and causes chronic meningitis. It may mimic acute bacterial meningitis. This types of the disease aren’t contagious from person to person. Cryptococcal meningitis is a common fungal form of the disease that affects people with immune deficiencies, such as AIDS. It’s life-threatening if not treated with an antifungal medication.

It can also result from noninfectious causes, such as chemical reactions, drug allergies, some types of cancer and inflammatory diseases such as sarcoidosis.

Signs and Symptoms of Meningitis

Early symptoms may mimic the flu (influenza). Symptoms may develop over several hours or over a few days.

Possible signs and symptoms in anyone older than the age of 2 includes:

The treatment depends on the type of disease you or your child has.

The acute bacterial disease must be treated immediately with intravenous antibiotics and, more recently, corticosteroids. This helps to ensure recovery and reduce the risk of complications, such as brain swelling and seizures.

The antibiotic or combination of antibiotics depends on the type of bacteria causing the infection. Your doctor may recommend a broad-spectrum antibiotic until he or she can determine the exact cause of the disease.

Your doctor may drain any infected sinuses or mastoids — the bones behind the outer ear that connect to the middle ear.

Antibiotics can’t cure viral this viral disease, and most cases improve on their own in several weeks. Treatment of mild cases of this disease usually includes:

Your doctor may prescribe corticosteroids to reduce swelling in the brain, and an anticonvulsant medication to control seizures. If a herpes virus caused your meningitis, antiviral medication is available.

Common bacteria or viruses that can cause the disease to spread through coughing, sneezing, kissing, or sharing eating utensils, a toothbrush or a cigarette.

These steps can help prevent the disease:

Isreal Olabanji DST RNhttps://www.healthsoothe.com
Am Isreal olabanji a dental assistant and public health professionals and has years of experience in assisting the dentist with all sorts of dental issues. We regularly post timely and trustworthy medical information and news. My goal is to enlighten everyone in all aspects of health towards participating in fitness, Dental care, healthy recipes, child health, obstetrics, and more.
Previous articleCysts: Causes, Symptoms, Types and Treatment
Next articleEbola Virus: Causes, Symptoms, Prevention and treatment

Important Things you Should Know Before Getting an Ultrasound

Alopecia areata: What is the, Diagnosis, and How is it Tested

Heart palpitations are feelings of having a fast-beating, fluttering or pounding heart. Stress, exercise, medication or, rarely, a medical condition can trigger them. Although heart...
Read more
HEALTH CARE

Moringa Oleifera known popularly as just Moringa is one of the new plants in Nigeria gaining a lot of popularity because of is insanely...
Read more
HEALTH CARE

Cost of Radiotherapy in Nigeria (2021): All You Need to Know

There has been an increase in the number of cancer cases in Nigeria. Some people allege that it is the disease of the rich...
Read more
HEALTH CARE

Chemotherapy is the chemical treatment to kill or halt the replication and/or spread of cancerous cells in a patient. Cancer is being seen as one...
Read more

Tips For New Physicians To Have A Successful Career

Interdental Papilla: Area of Your Teeth Most Susceptible to Gingivitis

What can cause white spots on teeth?