If you are a Nigerian, then you must be very conversant with red oil, it’s a product that we make use of a lot in our lives and is practically a key ingredient in almost all of our meals. From soup to beans and so much more, we basically can’t make our delightful Naija Chop without Red Oil.

Palm oil is an excellent source of tocotrienols, a form of vitamin E with strong antioxidant properties that supports brain health. Animal and human studies suggest that the tocotrienols in palm oil may help protect the delicate polyunsaturated fats in the brain, slow dementia progression, reduce the risk of stroke and prevent the growth of brain lesions.

In a two-year study of 121 people with brain lesions, the group who took palm oil-derived tocotrienols twice a day remained stable, whereas the group who received a placebo experienced lesion growth. It supports brain health by raising blood circulation by collateral arteries to the areas of the brain that suffered an ischemic stroke. This is one of the most important health benefits of Red Oil.

One of the numerous health benefits of red oil is its ability to improve heart health by lowering cholesterol level in the blood. Red oil generally appears to have beneficial effects on heart disease risk factors, including lowering “bad” LDL cholesterol and increasing “good” HDL cholesterol. Scientific studies have found that total and LDL cholesterol levels were lower in people who followed palm oil-rich diets than those who consumed diets high in Trans fats or myristic and lauric acid

In a particular study, people consumed either 25 ml (2 tablespoons) of olive oil or a hybrid palm oil daily. Based on a 15% drop in LDL cholesterol in both groups, researchers suggested this palm oil could be “the tropical equivalent of olive oil”

The reason for high cholesterol is the building of too much fatty substance in the arteries, as it makes it hard and thin, which pushes the heart to work harder for pumping blood throughout the body. Red Oil Helps Prevent That.

Palm oil can help improve vitamin A status in people who are deficient or at risk of deficiency. Studies in pregnant women in developing countries have shown that consuming red palm oil increases vitamin A levels in their blood, as well as in their breastfed infants. One study found that people with cystic fibrosis, who have difficulty absorbing fat-soluble vitamins, experienced an increase in blood levels of vitamin A after taking two to three tablespoons of red palm oil daily for eight weeks

Red palm oil has also been shown to help boost vitamin A levels in adults and young children. A study from India reported that preschool-aged children who took 5 ml (1 teaspoon) per day had greater increases in vitamin A levels than children who received vitamin A supplements. This is one of the best health benefits of Red oil as it offers you nutrients in a natural manner and doesn’t warrant you to buy supplements.

If you take a dose of around 8 grams every day, it can work in the best manner for your body. 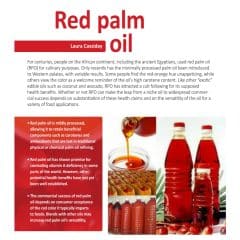 Vitamin E, synthetic or natural, is widely used in the cosmetic/personal care industry. The main reason for the use of vitamin E was for its antioxidant properties in the protection of the skin against the onslaught of free radicals or oxidative stress caused by chemical insult and UV rays in our daily atmosphere. Most of the vitamin E used in cosmetic is mainly of the tocopherol form (synthetic and natural forms).

Fueled by the many recent scientific publications on the benefits of tocotrienols in cosmetic application and women’s health, the use of tocotrienols has been gaining tremendous attention in the oral and topical cosmetic and personal care industry. Exciting Science and research are being conducted on tocotrienol for its superior protection of skin and skin ageing compared to tocopherol as well as the skins first line of defence against free radicals.

Dr Nicholas Perricone, a dermatologist at the Yale Medical Center, in his New York Times’ best-selling book, “The Wrinkle Cure,” advocated the use of tocotrienols in cream to promote skin health and prevent skin ageing.

A recent human clinical study completed at The Ohio State University Medical Center also reported that end-stage liver patients (those waiting for liver transplantation) supplemented with Tocomin SupraBio resulted in statistically significant protective effects. Another group of a researcher in Malaysia also reported that taking 200 mg of Tocomin SupraBio twice a day was significantly effective in addressing fatty liver. This study was presented at the Liver Meeting of the American Association for the Study of Liver Diseases (ASSLD) in Boston in 2010. This entails that a diet of Red Oil can help keep your Liver in Perfect Health and contributes to the health benefits of red oil

Palm fruit carotenoids are widely used in the fat- and dairy-processing industry to standardize the colour of margarine, butter, and ghee. They are also widely used as a natural colourant in confectionery and convenience foods, and to replace synthetic colourants in the beverage industry. The trend, especially in Europe, the United States, and Japan, is moving toward replacing synthetic with natural colourants.

Red palm oil is rich in natural phytonutrients that are important for health. These phytonutrients (i.e. : tocotrienols and carotenes) are also powerful antioxidants that help maintain the stability of the oil during cooking process and may extend the shelf life of food prepared with red palm oil.

Numerous scientific studies have shown how tocotrienols and carotenoids work in supporting important health conditions, especially in supporting brain and heart health, liver health as well as skin nutrition. However, in all these research, a common and important thread for positive effects has been the naturally-attained full spectrum tocotrienols or carotenoids complex.

There have been negative studies for both vitamin E (i.e.: alpha-tocopherol) and beta-carotene in the past, due to the fact that those studies only used a single form (isomer) of the nutrient. The market is moving towards taking what nature produces as a wholesome complex of ingredients, naturally found in our diet as opposed to a single ingredient formulation.

Therefore, it is important to use what nature produces as the combination of nutrients naturally found in red palm oil work synergistically to confer the optimum functionality and health benefits.

Every one of us knows that red oil has been a key ingredient in anti-poison herbal mixtures and can testify to its effects. I believe it should be added to the list of the Health Benefits of red oil.

Other Health benefits of red oil include:

High Blood Pressure Prevention and so much more

What is Home Health Care and Its Types?

6 Ways in Which Depression Differs in Men and Women

Cost of Endoscopy in Nigeria (2021): All You Need to Know

Precautions that must be considered for surgeons