Men’s quest for satisfying women in bed, and making them feel good about themselves accounts for the huge sum being spent on a daily basis on Hausa medicine manpower, in other words, aphrodisiacs of Hausa origin. One might wonder, why the preference for manpower from the north? It boils down to the use of herbal aphrodisiacs by the northern men, which helps them “fire down” when they’re with their women. They usually have numerous wives, and you will hardly hear the wives complain of being sexually unsatisfied.

Hausa medicine for manpower refers to the aphrodisiacs locally made and used in the northern part of Nigeria. Although they are now common in the southern part of the country too, mostly due to the migration of some Hausas for commercial purposes to the south. They are usually made from herbs, roots, and fruits, and help the men have longer and stronger erections, making it a good treatment for erectile dysfunction, among other things.

In this article, we will see the top 5 Hausa medicine for manpower and how they can help men conquer their erectile challenges, quick ejaculation, and overall sexual wellness. We will highlight the sources of these medicines for manpower, and the ingredients that go into making them.

Burantashi is a powder made from the bark of the Yohimbe tree. The tree is scientifically called Pausinystalia johimbe. Its bark is harvested and ground into powder that is usually light brown. The bark tree has been used to treat sexual dysfunction in traditional medicine for a long time.

It can be boiled in water and the water drunk for some time to treat erectile dysfunction. Also, the result of some scientific research done on the effects of Burantashi on the sexual behavior of rats, shows that it increases the level of testosterone in the test animals. This explains its efficacy in humans and its use in treating erectile issues in men.

Its ability to treat erectile dysfunction is traced to the presence of an alkaloid, Yohimbine, commonly used as a veterinary medication for reversing sedation in deer and dogs. However, in some mammals, including humans (there is limited literature to support this), it works as an aphrodisiac.

Burantashi can easily be gotten from any suya seller or you can choose to make yours by getting the bark of the tree and processing it to your taste.

Also called African Chew Gum or Silky Kola, Goron Tula is a fruit that can be found in the Northern part of Nigeria; Adamawa and Gombe states, to be precise. It has a characteristic glutinous slime and the fruit is usually chewed as if it were gum. 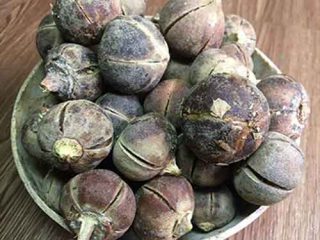 There are no scientific backings to its claim but its users among both genders have claimed that it is an effective libido enhancer. The men claim it helps them get stronger erections and last longer during sex. The women, on the other hand, claim it helps them have better vaginal lubrications. As per recommendation from local sexual experts, individuals may need to chew about 10 fruits to feel its effect.

It can be chewed raw or the mucilage used as part of a soup, as it is commonly doe in some parts of Africa. Its abundance in the two northern states; Adamawa and Gombe, makes it a Hausa medicine for manpower.

Bakin Gagai, also called Black aphrodisiac, is a tree you will readily find in the northern part of Nigeria, hence its inclusion in the list Hausa medicine for manpower. Its root has been an important medication to addressing sexual dysfunction in men. In traditional medicine, the roots are washed and boiled to give the water to the affected person. Sometimes, its extracts can be gotten by soaking them in alcohol.

Although there is usually a safety concern about using herbal medications due to the phytochemicals they contain, research has passed the root to be safe for consumption in lower mammals, such as rats.  It is also rich in alkaloids as in Burantashi and abundant in iron, making it suitable as Nigerian herb or food rich in Iron.

Kayan Mata and Kayan Maza is commonly seen as a fetish means of holding men from leaving a particular woman. Although many have attested to its effectiveness, it is more or less a confirmed Hausa medicine for manpower. While it is commonly used by women to increase vaginal lubrication, making the sexual act more enjoyable for the individuals involved.

Kayan mata is literally translated to mean a woman’s property. It is used to enhance sexuality between a man and his woman. However, it is erroneous to think it is made for women to use. Men have their own version, and it is called Kayan Maza or Maganin maza. It is a combination of leaves and roots that help to increase libido in men.

Tiger nuts, commonly called Aya in the Northern part of Nigeria, when combined with Dates (Dabino) and coconut, is an excellent Hausa medicine for manpower. It has other health benefits, such as detoxification of the body, but it is mainly used for its sexual benefits.

Men use this combo to help them last longer in bed with their women, and help the, have stronger erections. The ingredients are easy to come by in the markets, and you may also find already made combo for immediate use.

Hausa medicine for manpower is locally known to be effective in helping men stay at the top of their games, sexually. However, for some herbal aphrodisiac options, the safety for usage is a concern. If you are on any aphrodisiac, such as Viagra, it is not advisable to combine them with the aphrodisiacs in this list.

TEETHING AND TREATMENT IN BABIES

How Psychologists Can Help to Solve Relationship Problems

How to Reduce baby Bottle tooth decay And Sugar Intake