Smallpox is one of the most dreaded of all infectious diseases, and one of the most contagious. When smallpox is epidemic, not more than one or two out of every one hundred unvaccinated persons in a community are likely to escape the disease.

It attacks old and young, male and female. From of old, there is no disease that has been more feared by the people in every land, than smallpox, for not only is it very contagious, but also extremely virulent. when it afflicts the unvaccinated the death rate ranges from 10 to 80 per cent. In case the one afflicted escapes death, he is almost certain to be disfigured for life with pockmarks on the face or to be blind in one or both eyes.

Smallpox is caused by a very stable virus which may remain alive for months under favourable circumstances, particularly in a dry environment. It may remain on the floor or on the walls of a house for months and infect persons coming in contact with the room. The crusts and scales are very infectious. The bedsheets carry the virus to the laundry. It may also be carried in the air of the sick room or be transmitted by letters written from the sick room ( other materials that are edible). No age or sex is immune, and aboriginal peoples seem especially vulnerable.

The diagnosis is made by noting the toxicity of the individual, which is much greater than in cases of chickenpox. He becomes restless and irritable.

He has headaches and excruciating backache with vomiting and prostration. His temperature soars to 103° to 104° F, the pulse and respiration are rapid. 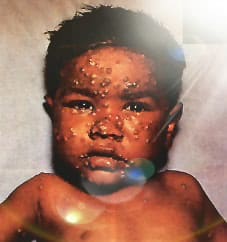 The lesions in smallpox are especially noted on the face, the palms, and the feet, and are all formed in one stage of development. This is in contrast with chicken pox, where the lesions are formed gradually, going through various stages and all being located more on the trunk of the body.

There are three different strains of smallpox, varying from comparatively mild to very severe. This accounts for the variance of the mortality rate, ranging from 10 to 60 or even 80 per cent.

There is no specific treatment. The patient should be kept as comfortable as possible. The first thing is to set up a rigid quarantine of the case, permitting only one or two people to attend the patient. Those who care for him should always wear a special gown. Upon leaving his room they should remove this and leave it hanging just inside the door.

The local health authorities should be informed and the best medical help in the area should be engaged. Bed covers should be kept off the skin with suitable cradles. The mouth should be cleaned with antiseptic mouthwashes. One teaspoonful of salt in a pint of will water makes a good mouth wash. Sedatives such as phenobarbital should be used to quiet the patient, and at times morphine may also be used to ease the pain.

During the time when pustules develop, Terramycin or penicillin may be given to prevent secondary infection. 1f one of the lesions becomes septic, some penicillin or preferably bacitracin ointment should be applied. No other local treatment is necessary.

The only way to prevent smallpox is to have a vaccination every three years Previous to 1796 there was no method known by which smallpox could be cured; neither was there any method known by which the. A disease could be prevented. But in that year an English physician by the name of Edward Jenner discovered the method of vaccination as a means of protection against smallpox.

The microorganism that produces smallpox in man also produces a somewhat similar disease in the cow called cowpox. The lymph used in vaccinating is obtained from a calf afflicted with cowpox. It is injected into the body of a man and a vaccination eruption results at the point vaccinated. The procedure is accompanied by some fever throughout the whole body.

Following this, the person is protected for a longer or shorter period against smallpox even though he may be directly exposed.

From the time that Jenner discovered vaccination against smallpox, many countries have adopted this preventive method on a national basis, with the result that there has been a great decrease in the number of people who have died of smallpox during the past 100 years. For example, Germany in 1874 passed a law making re-vaccination and compulsory.

This law requires the vaccination of all infants before they are twelve months old and re-vaccination at the age of twelve years. Since that year there has been no epidemic of smallpox in Germany, All countries where vaccinations are done have the same success, so much so that many countries today are completely free from the threat of this contagion.

Vaccination with the lymph from cowpox is the only absolute preventive against smallpox. It is the duty of every father and mother to have each child (whether male or female) vaccinated before it is a year old and to have it re-vaccinated every three years.

Tetanus: One of the most common infectious diseases

The New Health and Longevity by A. C. Selmon a. The Oriental Watchman Publishing House, 1960. Hardcover. Good. 1960

Isreal Olabanji DST RNhttps://www.healthsoothe.com
Am Isreal olabanji a dental assistant and public health professionals and has years of experience in assisting the dentist with all sorts of dental issues. We regularly post timely and trustworthy medical information and news. My goal is to enlighten everyone in all aspects of health towards participating in fitness, Dental care, healthy recipes, child health, obstetrics, and more.
Previous articleTetanus Causes, Symptoms, Prevention, and Treatment
Next articlePneumonia: Causes, treatment and prevention

What You Need to Know about Ashwagandha

The 10 Best Ways to Stay Healthy This Summer

Can You Actually Benefit From Nexxus Aloe Rid Shampoo?

Benefits of Vaping with an Epipe and Other Vaporizers

The Benefits Of Red Light Therapy For Both Humans And Animals

HOW TO SELECT THE BEST HEALTHCARE INSTITUTE FOR EDUCATION

How to Improve Your Sleep Quality