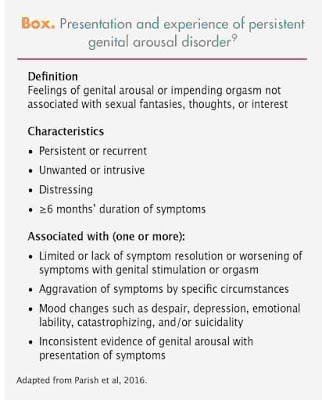 Physical arousal caused by this syndrome can be very intense and persist for extended periods, days or weeks at a time. Orgasm can sometimes provide temporary relief, but within hours the symptoms return. The symptoms can be debilitating, preventing concentration on mundane tasks. Some situations, such as riding in an automobile or train, vibrations from mobile phones, and even going to the toilet can aggravate the syndrome unbearably.

PGAD can lead to ongoing physical pain, stress, and psychological difficulties due to an inability to carry out everyday tasks. The condition can affect women of all ages.
There is not enough medical evidence on this incidence of PGAD, Experts have not clinically confirmed the incidence of PGAD, as many people with the condition feel too embarrassed or ashamed to seek medical help.

The sufferer might have a throbbing or tingling feeling in her genitals, increased blood flow to the area, or vaginal contractions.  Some women with PGAD have spontaneous orgasms.  But none of these symptoms is triggered by a sexual situation.

The sensations experienced are known as dysesthesias.

And it often leads to:

These can lead the person with PGAD to feel consistent like they are about to experience orgasm, or they may experience waves of spontaneous orgasms.

The condition can lead to psychological symptoms due to the persistent discomfort and impact on day-to-day living.

The use of SSRI antidepressants medication can lead the person with PGAD  to found herself suffering from restless leg syndrome and an overactive bladder. Both of these conditions are related to PGAD.

People with chronic, or incurable, persistent genital arousal disorder believe there needs to be more research into PGAD. But what sufferers really want people to know is that it’s a pain disorder, rather than a sexual one.

However, this is not the case in every woman suffering from  PGAD. Research has implied a link between PGAD and the veins, hormones, nervous system, and chemical balance after using some types of medication.

Also, there is a chance that cysts may also cause the condition. Tarlov cysts are sacs filled with spinal fluid that appear on the sacral nerve root. Sacral nerves at the bottom of the spine receive electrical signals from the brain, and they relay these instructions to the bladder, colon, and genitals.

However, a standard medication for PGAD doesn’t exist. The condition is treated with everything from anti-neuralgic medicine usually prescribed for Parkinson’s disease, too, in some cases, Botox injections. The symptoms can be calmed, but not cured, and permanent frustration can have severe effects on mental health. This creates difficulty in diagnosing and treating the disorder.

PGAD cure usually centers on managing symptoms, due to the often-unclear causes of the condition and varies from person to person.
Gabapentin, a drug that eases nerve pain and was originally developed to treat epilepsy. The medication helps the person to cope with PGAD treatment, but it doesn’t relieve the symptoms entirely. “

Now, the people suffering from persistent genital arousal disorder found a great deal of relief through the use of a transcutaneous electrical nerve stimulation (Tens) machine. This device, commonly used to treat back pain, sends small pulses of electricity into the base of the spinal column. Expert says the use of this device has made them practically PGAD-free.

Women suffering from persistent genital arousal disorder can also undergo cognitive behavioral therapy , and most of them have finds out that activities such as mindfulness meditation and swimming help to keep them calm. But the underlying symptoms are unavoidable.
Prescribed medication or changes in medication can help to manage the condition.

In some cases, Changing current medications by removing drugs with herbal may be helpful. In nerve-related cases, such as a Tarlov cyst that I mentioned earlier on, the treating doctor may suggest surgery such as releasing the nerve from entrapment.

PGAD is not yet curable. However, its symptoms can be managed on an ongoing basis to improve the quality of life of people with the condition and to reduce the psychological harm of PGAD.

Care of patients with PGAD begins by providing a safe and nonjudgmental atmosphere in which to facilitate an open and honest discussion. If PGAD is suspected, HCPs can consider referral to a sexual medicine provider or visit the International Society for the Study of Women’s Sexual Health (ISSWSH) website for more resources.
RELATED READING

3 Steps to Use Activated Charcoal to Whiten Teeth

3 rules to follow when choosing products for skincare for kids

Do You Feel Like You Look 15 Years Older After 15 Months of Lockdown?

The Kenny Method of Treating Polio

Scent Leaf and Menstruation: Is There A Correlation?

Herniated disc as a Cause of Low Back and Leg Pain