Mandibular hypoplasia is often a congenital condition, but can also occur as a result of trauma or injury. The cause of congenital mandibular hypoplasia can vary and a cause is not always identified in pediatric patients born with this facial malformation. Similarly, the condition may be only one of several specific underdevelopment that is the result of a birth defect. Other areas that may be affected include the ears, upper jaw, and nose.

According to medical research, a lot of recent cases of mandible hypoplasia have been treated, but the treatment of mandible hypoplasia generally was not mentioned clinically because only early period treatment methods have been mentioned. Recurrence of fusion between the alveolar arches after separation of the maxilla and mandible have been reported. Clinically, a silicon block was used to keep the maxillary and mandibular alveolar arches separated.

Causes of the Mandibular Hypoplasia

The imaging of this condition shows maxillary and mandibular lesions. These lesions rarely include radiolucency with irregular, defined or poorly defined borders. So the widening of the boundary of orbits causes hypoplasia. Along with hypoplasia, poor pneumatization of ipsilateral maxilla also occurs.

However, not only hypoplasia of mandible is involved but hypoplasia of ramus, zygomatic arch, and the abnormal coronoid process is also involved. Some congenital syndrome may show mandibular hypoplasia as a clinical sign. 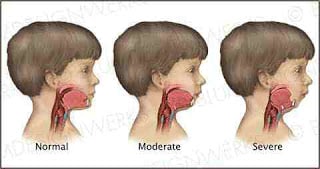 The appearance of people with the disorder is caused by a loss of bone in the mandible which the body replaces with excessive amounts of fibrous tissue. In most cases, the condition fades as the child grows, but in a few even rarer cases the condition continues to deform the affected person’s face. Mandibular hypoplasia also causes premature loss of the primary teeth and eruption of the permanent teeth.

Clinically, this condition may present as a deviated chin with asymmetrical facial features surrounding the mouth.

Complications can occur and will depend largely on the severity of the condition, but can include difficulty breathing, chewing and swallowing, which can lead to sleep apnea and weight loss or failure to thrive in infants. In some cases, a tracheotomy or feeding tube may be necessary until surgical correction can be achieved.

Since this disease is genetically linked genetic counseling may be the only way to decrease occurrences of the condition. The lack of severity of symptoms of the parents may be cause for failure to recognize the disorder. The optimal time to be tested for mutations is prior to having children.

The disease results from a genetic mutation and this gene have been found to spontaneously mutate. Therefore there may be no prevention techniques available.

Treatment and Surgery of Mandibular Hypoplasia

Surgery is the only treatment option for mandibular hypoplasia. Reconstruction of facial features is performed during surgery. The extent of surgery is dependent on its degree of under development. A series of bone grafting is performed to the rebuilt mandible. An oral or maxillofacial surgeon can perform this reconstruction surgery.

The maxillofacial surgeon performs the surgery based on the condition and makes recommendations treatment based on medical history, development, the severity of the condition, and age. Surgery of lower jaw line is quite complicated because mandibular jaw performs many functions and have many purposes.

Other than functioning, it has its importance in maintaining the facial structure. Sometimes surgery completely rebuilt facial features and also corrects or eliminates complications arisen from mandibular hypoplasia.

Surgery has greater success in improving facial features and correcting or alleviating complications that can occur because of hypoplasia, such as difficulty in eating and swallowing and breathing.

Isreal Olabanji DST RNhttps://www.healthsoothe.com
Am Isreal olabanji a dental assistant and public health professionals and has years of experience in assisting the dentist with all sorts of dental issues. We regularly post timely and trustworthy medical information and news. My goal is to enlighten everyone in all aspects of health towards participating in fitness, Dental care, healthy recipes, child health, obstetrics, and more.
Previous articlePersistent Genital Arousal Disorder (PGAD): Causes, and Treatments
Next articleHow to Cure Sleep Apnea Naturally at Home Without CPAP?

What You Should Know About Indraprastha Apollo Hospitals Delhi, India

Medical Malpractice: A Look into the Ethics of Misdiagnosis

A Comprehensive Guide to Choosing a Dentist in Plantation

How Psychologists Can Help to Solve Relationship Problems