How Cold Weather Affects Your Body

Autumn is beginning to fade out and temperatures across the world are starting to drop as winter approaches. For some people who live in the most northern corners of the world, the cold weather is somewhat of a norm, but for most people, the bitterly cold temperatures are a shock to the system.

Cold weather doesn’t jut feel fresh, though; it can have a serious effect on your body, too. Here are some of the ways cooler temperatures impact your body and how your body tries to protect itself. 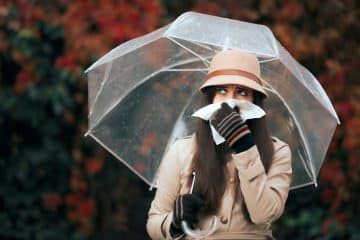 One of the most common (and annoying) ways your body attempts to combat the cold is by increasing mucus within the nose, causing it to run. When you breathe in, your nose automatically produces moisture to warm up with air before it travels to your lungs in order to protect the lung tissue. Cold air is usually very dry, and this irritates the nasal lining. In an effort to stop irritation and to protect sensitive lung tissue, your nose ups the level of moisture it produces. When there’s too much moisture, excess fluid drips out which causes a runny nose.

Cold air is dry because of a lack of humidity, and not only does this irritate your nose and cause it to run, it also irritates the rest of your skin. It’s extremely common for people to have dry skin during winter, but at most, it’s nothing more than annoying. The itchiness and flakiness isn’t detrimental to your health, but it can make your skin more sensitive and likely to crack. For this reason, it’s recommended that you moisturise daily to keep your skin hydrated and healthy.

Although your nose does it utmost best to warm up the dry, cold air before it enters your lungs, if you are in an extremely cold environment, it’s inevitable that some cold air will enter your lungs and irritate them. This can cause shortness of breath, coughing and wheezing. For most people this isn’t too much of an issue, but those with respiratory conditions such as COPD or asthma are likely to suffer with this more and have complications as a result. To reduce the risk of suffering from these symptoms, covering your mouth and nose with a scarf will reduce the levels of cold air entering your airways.

If you’re outside for a prolonged period of time, your body will begin to circulate blood in a different way. Your heart has to work harder to pump blood around your body when it’s cold, and in doing so, it prioritises your vital organs over your extremities (fingers, toes and nose). This can cause your extremities to feel cold or numb, and it puts extra strain on your heart as it has to work much harder to pump blood. This can lead to a plethora of health issues as detailed below.

If you are exposed to cold weather long enough for your heart to focus circulation on your vital organs, the strain can put you at an increased risk of a heart attack. Although most healthy individuals can recover when they warm up, people with heart conditions are more likely to suffer a heart attack. This is rare, though, and is only a risk is you’re outside for a long period of time continuously.

As your heart focuses circulation on your vital organs, blood isn’t pumped to your extremities in order to preserve heat. Whilst this may just save your life if you’re in the extreme cold for a length period of time, it can cause a host of other issues, the first of which being frostnip. This is the predecessor to frostbite, and whilst it’s not quite as serious, it can quickly develop into the latter. Frostnip is characterised by:

If you notice any of the above symptoms, you should warm yourself up slowly as soon as you can. Frostnip is reversible and won’t cause any lasting damaging, but if you ignore the signs and leave your skin exposed to the cold, you’re likely to develop frostbite which isn’t reversible. The signs of frostbite are:

When frostbite takes hold, it can affect the muscles and deep tissue below the skin which is serious in that it can affect movement and use of the area in the future. As the skin thaws out, it will blister and likely die. This can cause loss of extremities.

The most serious symptom of cold weather is hypothermia. This is most likely to affect people who are exposed to bitter temperatures with no reprieve, such as hikers, mountaineers and the homeless. Hypothermia happens when your body loses heat faster that it can generate it. When your body temperature drops too low, it affects your brain and bodily functions and – if left untreated – can lead to death.

Generally speaking, most people will only experience a runny nose and dry skin during the cooler months, but those who work outside, have inadequate shelter/clothing or are homeless are more likely to develop severe complications from the cold. Knowing the symptoms could save a life.

Isreal Olabanji DST RNhttps://www.healthsoothe.com
Am Isreal olabanji a dental assistant and public health professionals and has years of experience in assisting the dentist with all sorts of dental issues. We regularly post timely and trustworthy medical information and news. My goal is to enlighten everyone in all aspects of health towards participating in fitness, Dental care, healthy recipes, child health, obstetrics, and more.
Previous articleHOW DOES THE HEALTHCARE SYSTEM RUN EFFECTIVELY DURING A PANDEMIC?
Next articleLEARNING COUNTS: HOW EDUCATION IMPACTS PUBLIC HEALTH

How to get Rid of Acne(Pimples ), Blackheads and Boil Naturally

4 Tips for Maintaining Your Fitness Goals During the Holidays

Things to Consider Before Buying A Paint-by-Number Kit for A Child or Beginner: Personalize Everything!

Things to mean About Going to a Chiropractor

Planning to Retire Overseas? What You Need to Know

How can I Handle Medical Emergencies in dental practice?

Precautions to take when doing CPR on an HIV-positive person