laryngoscope instrument and their uses

A laryngoscope is a diagnostic medical instrument used by physicians and doctors alike, to view the patient’s pharynx and larynx. The pharynx is the region located behind the nose and mouth, and the larynx is also called the voice box.

How is laryngoscopy done?

A laryngoscope instrument is made specifically to fit properly into the patient airway and allow the doctor to perform a treatment called orotracheal intubation, in which a tube is inserted into the trachea or wind pipe through the mouth, to provide oxygen and medicine and to allow deep suction. 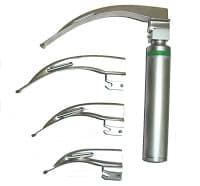 What are the Two-part and Sizes of the laryngoscope?

This instrument has two components: the laryngoscope blade and the laryngoscope handle. The handle contains the batteries required for lighting, and the blade inserted into the airway has a lamp at the end of it from which bright light shines during use.

Those blades are not sharp, and can not cut through the flesh. Laryngoscope blades come in various sizes, the smallest being 0 and the largest being 4. The patient’s size to be intubated determines the size of the blade used by the physician.

The typical laryngoscope’s handle and blade of the typical laryngoscope are two separate pieces that need to join together before using it,  but this can be done within some seconds, enabling physicians and paramedics to use this tool in a respiratory emergency that involve orotracheal intubation.

A laryngoscope instrument is not that big; the handle is just like the size of a door handle, and the blade is a little smaller than the handle.

What are the two types of laryngoscope blades?

There are two types of laryngoscope blades: curved and straight. Both are inserted deep within a patient’s airway.

A straight blade is used to raise a leaf-shaped region called the epiglottis, which prevents the intrusion of food and foreign matter into the windpipe, and this type of blade is usually chosen when a pediatric patient needs to be intubated.

When adult patients have to be intubated, a curve blade is chosen. It is not the epiglottis that is raised with a curved blade, instead, it is inserted into another structure called the vallecula.

It doesn’t matter the type of blade used, the aim is the same. It allows the doctors to view the vocal cords through which the endotracheal tube can be passed into the trachea.

The importance of examining the vocal cords lies in the fact that it is important for the doctor or paramedic to ensure that he or she positions the tube in the trachea and not the esophagus when performing orotracheal intubation, the tube leading to the stomach.

Isreal Olabanji DST RNhttps://www.healthsoothe.com
Am Isreal olabanji a dental assistant and public health professionals and has years of experience in assisting the dentist with all sorts of dental issues. We regularly post timely and trustworthy medical information and news. My goal is to enlighten everyone in all aspects of health towards participating in fitness, Dental care, healthy recipes, child health, obstetrics, and more.
Previous articleThe Health Benefits of Eating Organic Food
Next articleMouth gag: Dental mouth gags and their uses

Gigli saws and their uses

What You Need to Know After Your Slip And Fall Accident

How to Properly Use a Dental Suction: 6 Step by Step Techniques

Cost of Laparoscopy in Nigeria (2021): All You Need to Know

3 Common Medical Errors That Can Lead To A Malpractice Lawsuit