Diphtheria: Causes; Treatment and Care of the Patient

Diphtheria is one of the most common infectious diseases than polio and it is accompanied with so much danger than polio. The mortality rate is high and the illness is distressing.

According to medical research, the tragic thing about it is that it attacks children between the ages of two and five more than any other age, and it particularly affects the throat. At this age, their throats are so small that it does not take much to obstruct them. Also, it is difficult to explain to children of this age what their trouble is and why they are suffering.

Most of the contagion is due to droplet infection. Children playing together infect each other. Many times they are carriers of this disease, passing it on to others quite unknowingly. The bacteria of this infection may live in the dust and floors of a darkened room for several weeks.

Sometimes diphtheria in a mild form will be changed into a virulent form, and an epidemic begins without anyone’s knowing how it got started. 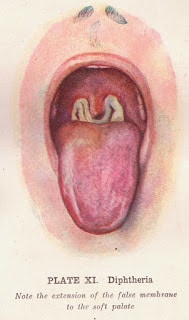 How does Diphtheria affect the body?

The course of Diphtheria disease :

One to seven days after exposure the throat get sore, a slight fever develops and a general feeling of influenza sets in. Soon the grey-white membrane begins to appear. The patient becomes very I’ll, much worse than in the case of ordinary sore throat.

The diagnosis is made by taking a smear of the throat and if possible a culture. Sometimes Streptococcus exhibits much the same symptoms and the two can be differentiated only by smear and culture.

The standard treatment is diphtheria antioxidants, given intravenously or intramuscularly, and depending on the weight of the individual being treated and the seriousness of the infection. After five to six such injection the patient must be tested if his body reacts to the injection before given. Along with the ampoule there, we are instructions for the administration of the serum.

The serum is made from the serum of the horse which has been infected with virulent diphtheria and has developed a good immunity. Also, the patient should take antihistamines for eight days after his treatment.

According to medical researchers, there is good evidence that penicillin is effective against diphtheria. This can be used in cases where the smear and culture indicate the possibility of the disease and where no serum is immediately available. This we take care of a Streptococcus or staphylococcus infection and may also take care of diphtheria. The treatment should be repeated daily until the infection disappears.

How to care for Diphtheria Patient :

If possible the patient should be kept in a hospital, as a tracheotomy is often needed and this will have to be done by a competent surgeon.
After the illness is over the patient should be tested to make sure he/she is not a carrier. Otherwise, he will be infecting many people with whom he may come in contact.

No parent who has seen the horrors of this disease in his child needs to be persuaded about the necessity of immunization. At the age of three months, every baby should be taken to the doctor for his first injection of the triple vaccine, ( DPT), which gives protection against diphtheria, pertussis  ( whooping cough ) and tetanus.

A series of three injections are given one month apart and a booster should be given upon the completion of one year, and after that, one such injection every two years up to the age of 10. Beyond the age of 12 DPT vaccine gives a considerable reaction.

Furthermore, after the age, it is not necessary to give the vaccine.  For two reasons, then, medical science has developed an adult type of vaccination for diphtheria and tetanus only. It is made in a different way so that it does not cause severe reactions.  In a country where diphtheria is prevalent, this vaccination should be repeated every 2 or 3 years as long as diphtheria is endemic.

However, if children have been definitely exposed to diphtheria or if the nurse who cares for the patient is not sure of recent vaccination, immediate protection for them can be had by injecting the antiserum.
When the patient recovers, the room should be scrubbed with soap and water to prevent infection of future occupants of the room.

The New Health and Longevity by A. C. Selmon a. The Oriental Watchman Publishing House, 1960.

Phenocal Review: Is It the Best Diet Pills To Buy in 2021?

Answered – Is Aloe Vera the Solution to Your Hair Fall Problem?

3 Tips and Tricks to Improve Your Sleep Quality

It’s All About (The) GREEN TEA

Fitness and Nutrition: An Excellent Combination for eating Healthy

Everything you need to know about Urotrin