Are MIT45 Kratom Product ucts The Future Of The Kratom Market? 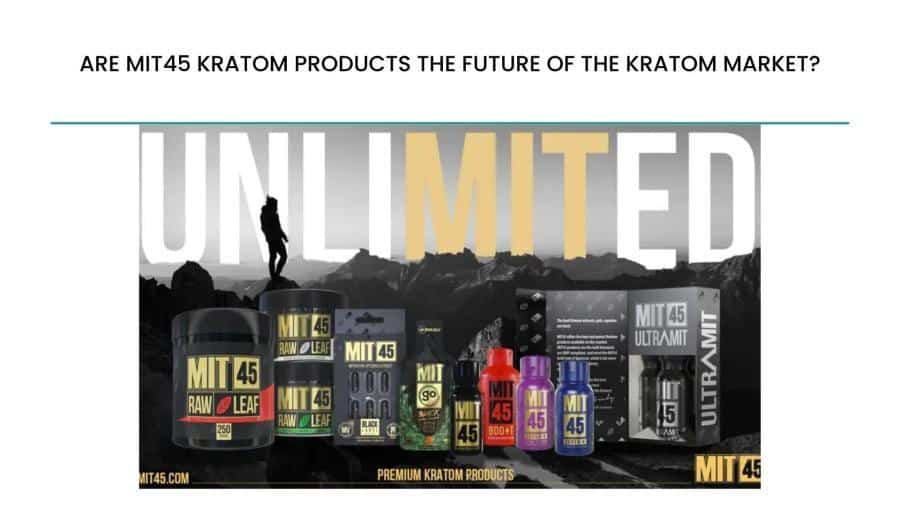 To start this article, we want to brief readers with a simple yet compelling concept of paradigm shift. First, let us recall the Copernican revolution, the shift from the Ptolemaic universe model to the heliocentric model of the universe. These are just fancy terms for saying that before Copernicus, it was believed by the religious authority that the ear6th was the center of the universe; then the revolution happened, and we now have the heliocentric model, which suggested that the sun is the center of our solar system and the earth revolves around it. In short, it was a paradigm shift. When a new method of belief substitutes for an already established belief, like, a shift in science from the Newtonian perspective to the theory of relativity, it is a classic example.

In this article show
What Is Kratom?
About MIT45
The Present & Future
Conclusion

There is a shift in the paradigm of how people think about health care and how they feel about it now. The change happens in many folds, all linking with each other. Firstly, a considerable amount of importance goes to mental health, and people have started prioritizing mental health. It is no longer a taboo, and we have accepted that we all have suffered from bad mental health at some point in life. Secondly, the idea that prevention is better than cure is appreciated.

People take precautions, and supplements, to prevent getting sick rather than treating illness when it hits us. The third shift is the shift from prescription drugs to the notion of natural remedies. People have started recognizing traditional remedies and their manifold benefits, most of which come in handy as a supplement. All of the above significantly contribute to the change in the perception of the notion of " getting high" and usage of hallucinogenic substances; they are not looked down upon now as "sin."

The above inference was vital that we made to give readers an idea about the expanding market of Kratom-based products and their wide acceptability. The market is strong, growing exponentially, and these products have strong fan bases worldwide. For instance, in the USA, when Federal agencies like DEA and the Department of Health and Human Services tried to ban this due to the only loophole that is the lack of research, protests erupted across the whole country, and people came out into the streets to show support for the product. As a result, agencies supporting banning the product had to rethink their decision. Therefore, we are here to enlighten the readers and potential consumers about the Kratom market and a specific brand that has won hearts across the USA, i.e. MIT45 Kratom products. You can avail the same at https://mit45.com/

Mitragyna speciosa, a plant primarily found in Southeast Asia, is the source of the herb known as Kratom. It is related to the coffee plant because it is a member of the Rubiaceae family. Since the 19th century, Kratom has been a well-known herb in Asian nations. Southeast Asians have utilized it as a natural remedy. It grows abundantly in the wild in the hot, humid woods of Thailand, Indonesia, Malaysia, Myanmar, and other Southeast Asian countries.

Until recently, the locals only used it as a medicinal herb. Since being introduced to Western countries, this plant product has swiftly gained appeal. Chewing was initially the most popular method of consumption. Nowadays, individuals avoid chewing in favor of other techniques. MIT45 Kratom is helpful in the treatment of severe pain and anxiety. In addition, it provides people with several therapeutic and recreational advantages. Kratom wax, Kratom tincture, pills, vape cartridges, and many other Kratom-based items are available.

Senior citizens enjoy Kratom tinctures because one can intake them directly, while many teens enjoy Kratom candies because they taste pleasant. Kratom also has psychedelic qualities. It is well known for boosting mood and cognitive function. Additionally, it is a CNS stimulant to increase physical and mental vigor. There are three different strains available: green-vein, white-vein, and red-vein.

MIT45, one of the leading Kratom vendors in the country, provides the broadest range of Kratom products at the moment. To better serve its diverse consumers, MIT45 has developed an internal workforce that reflects its customers with diversity. All extracts, capsules, and raw powders prepared by the company are from Kratom. They are GMP compliant. They develop and create items of the highest caliber by obtaining premium materials and maintaining the highest GMP requirements for production. The brand's Triple Purification Process eliminates all impurities, solvents, and chemicals to produce the most refined product possible for consumers.

Similar effects to opioid medications like morphine and codeine are visible after using Kratom. Many users feel that Kratom improves their mood and gives them a sense of calmness. According to much research, it may encourage heightened sensory activity, euphoria, general well-being, and relaxation. This change in their attitude increases their productivity. The Kratom plant's mitragynine component can enter the user's bloodstream.

For a happy and healthy lifestyle, the associated reduction in stress levels is essential. It aids individuals in striking a balance between work and family responsibilities and can raise productivity levels. Customers of Kratom get immediate relaxation and stress relief. It can lessen anxiety. Additionally, it may attach to their neural receptors and reduce brain activity. In the present scenario, Kratom is widely popular due to its availability, usability, and potential health benefits.

Recent interests from stakeholders have also opened the scope for research, and more substantial evidence is present of its benefits. Atai Life Sciences, a biopharma company famous for putting psychedelic substances through clinical trials, has already expressed interest in it. According to the American Kratom Association, Kratom is currently a $1.3 billion industry in the U.S., with sales occurring online and in smoke shops. It's also one of the compounds most frequently found in international drug seizures among those that the U.N. considers "new" drugs. If anything else, the future looks bright for Kratom.

We have tried to inform the reader about Kratom. We believe we need to be transparent with our readers and potential consumers and not keep any discrepancies. Let us begin with a very cliched yet important quote, i.e., "Too much of everything is dangerous." Kratom is no miracle but something that could facilitate your lifestyle.

It not only applies to Kratom but also to everything else we do in our life, so thus Kratom. It is best when used regulated, but if we end up using it outrageously, it might have consequences for our body as an addiction. People become addicted to almost everything, and no form of addiction is good. Thus Kratom is a valuable natural supplement until and unless you use it responsibly.

Previous ArticleHow to get rid of bad breath
Next Article Saving Money on Prescription Drugs: The Benefits of a Discount Drug Card