Morgellons is a controversial and poorly understood condition in which unusual thread-like fibres appear under the skin. The patient may feel like something is crawling, biting, or stinging all over.

Some medical experts say the condition is a physical illness. Others suggest it is a type of psychosis called “delusional parasitosis,” in which a person thinks parasites have infected their skin.

Your doctor may call it an “unexplained dermopathy,” which means a skin condition that occurs without a known reason. Other medical professionals have dubbed the condition “fiber disease.” 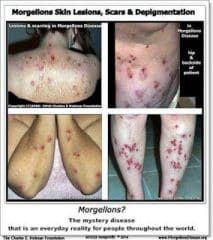 According to the Morgellons Research Foundation, crawling, biting and stinging sensations and the emergence of strange blue, black or red fibers from the skin characterize a disease that nearly 14,000 people suffer from, according to the Foundation.

This is often accompanied by exhaustion, short-term memory loss, joint pain and changes in vision. The condition was named Morgellons in 2002 by a mother who believed her two-year-old son was suffering from the disease. The name comes from a 17th-century skin condition found in France, in which children died after the emergence of ‘dark hair.’

However, there is much debate over whether the condition actually exists.

What is the prognosis for Morgellons disease?

In March 2008, the Journal of Dermatologic Therapy reported that most doctors believe it to be a form of delusion, in which sufferers falsely believe they are infected with parasites. Consequently, the fibers in the skin are thought to be textile-based, picked up by oozing scabs resulting from more common conditions such as eczema or scabies.

The U.S. based Center For Disease Control and Prevention recently announced it would investigate the disease after an increased number of inquiries from the public.

Unpleasant skin sensations are the main complaint. People with this condition may also complain of:

People with this condition sometimes complain of other symptoms which may include:

There are reports of the disease in patients with Lyme disease. Many healthcare professionals believe that Morgellons disease is a form of psychosis that causes the person to imagine that they are infested with parasites (delusional parasitosis) rather than a diagnosis based upon physical signs. Research on this syndrome has so far not found it to be caused by an infection. It is therefore not contagious. This condition has not been found to be the result of an environmental toxin.

There is no known cure for Morgellons. Treating any medical or psychiatric problems that occur at the same time as Morgellons may help ease symptoms in some patients.

A team of medical researchers at the Mayo Clinic also recommend that patients with these symptoms should undergo a psychiatric evaluation.

Who Gets Morgellons disease?

In the past, few doctors had heard of this condition. But in response to scattered reports, the CDC worked together with several other health care agencies to investigate this condition. Most reports came from California, Texas, and Florida, although patients have been seen in all 50 states.

The CDC study found that Morgellons is most likely to affect middle-aged white women.

Many of the patients in the CDC study showed signs of being obsessively concerned about health problems in general. This is called somatic concerns.

About half of the people in the study had other health problems, including depression and drug abuse.

What are treatment options for Morgellons disease?

While there is no specific cure for Morgellons disease, individuals who suffer from this condition have been found to benefit from medications that treat psychosis or tics, like olanzapine (Zyprexa, Zydis, Relprevv) or pimozide (Orap), respectively.

Ballantyne, C. “What is Morgellons Disease? Is it a physical or psychological condition?” Scientific American, May 13, 2009

How to Minimize Your Breast Augmentation Scars

What It Means to Live With a Heart Condition

GAINSWave Therapy and What to Expect

How to Become an Auxiliary Nurse in Nigeria

How to Replace Missing Teeth

7 Ways to Streamline Your WFH Process